Getting started with Warhammer 40,000 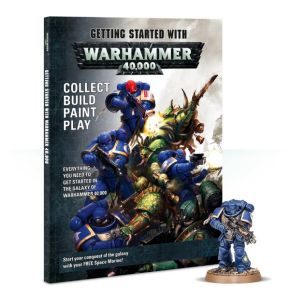 ere is no doubt that Warhammer 40,000 is a popular game, and little can prove that it’s impact has had a knock on effect on the games we play today, shaping them and often imitated but rarely surpassed .  With the game now in its eighth edition just recently released and celebrating its 30th anniversary this year, now seems the perfect time to get into Warhammer 40,000!

But what if you are new to the hobby? What if you walk into a Warhammer store for the first time ever and see people eagerly playing this game with a zeal that is almost fanatical. How do you go about starting to even get into this game set in the grim darkness of the far future?  For a long time it was mostly down to the staff in the Games Workshop stores to teach you the basics, of perhaps hope to learn from one of the regular gamers who frequent the store.  This can be a daunting task and can put off many newcomers to the hobby, with all the dice rolls and shooting phases and such.

Well help is finally at hand as Games Workshop have recently released the Getting Started With Warhammer 40,000 guide, a long overdue book that sums everything up in a very neat package and will guide you through the basics of starting in the hobby, collecting your forces and playing the game.

Weighing in at 103 full colour pages and lavishly laid out and illustrated, the guide is broken down into very easy to manage sections. Starting off with a one page introduction to what the book contains we Delve deep into the main thing that makes 40K stand out from it’s other competitors by leagues, the background!

Of course there are many games with an in-depth background out there, but you would be very hard pressed to find one that comes close too the sheer volume of information that we find in the 40K universe which is by and large a big pat of the games appeal.

Of course you can’t tell over thirty years of information in a book so small, but we are given the tourist information version of things you really need to know.

From the introduction to live in the forty first millennium to the forces and factions that inhabit this amazing universe; the first twenty pages manages to introduce all of this without overwhelming the reader, while on the other hand leaving much more to be discovered with further reading.

We learn about the recent events that have shaped the way the universe is right now, including the return of Roboute Gulliman the Primarch of the Ultramarines and the birth of Ynead the Eldar god of death.

Each of the forces gets a couple of pages to flesh the races out for those new to the hobby. This covers Space Marines, the forces of the Imperium, as well as the forces of Chaos, the Aeldari and the xenos threat of the Orks , Necrons, Tau and Tyranids!

Next up is the basic introductions into getting started in the hobby. This section covers everything from your first purchase to deciding what army you should go for and how best to collect your forces.

A section that covers a battle report is given next and follows the same style that’s been used in White Dwarf magazine did several years and gives the reader a glimpse into what goes on during your average game of 40K.

War zones are covered next with six pages dedicated to mapping out the major hotspots in the galaxy such as Cadia. This section also contains some pretty amazing artwork that really helps immerse the reader into the hard reality of the grim dark.

The next thirty or so pages are given over to painting those excellent miniature and showcasing the stuff that has made the Games Workshop studio one of the best in the industry.

Painting guides are given that will allow the newcomer to every basic technique they need to know to paint their Models, with alternate examples of Ultramarines and Nurgle Plague Marines, the two forces that come in the eighth edition boxed set Dark Imperium.  Each step is explained in much the same way that the Warhammer TV channel on YouTube guides you through the basics of paining a miniature and covers everything from which paints to use for the models to washing, drybrushing and basing.

The final section of the book is given over to the rules themselves and will guide you step by step when you play your first few turns of a game. Dark Imperium comes with a cheat sheet that is only four double sided pages long and is basically everything you need to play the game, the rulebook is just far more detail and it is this quick information that is revisited here with the total novice in mind from the off.

All the phases of the game turn are covered and explained without sounding condescending or coming off as to difficult to get to terms with and even the most novice player should be able to get the basics just by reading these examples!

The book is extremely well thought out and follows the usual high standards you would come to expect from the worlds leader in miniature gaming and each of the full colour pages drips with amazing artwork, set battle scenes or the beautifully detailed studio models, showing just what can be achieved with hard work, practice and patience.

But this is not all you get!  As a bonus when you purchase the book, you also get a free Primaris Space Marine attached to the front of the book, to add to your collection or just to simply start practicing your painting skills.  The marine is a click fit model that means that no glue is required to assemble it and it simply clicks together and slots in the base provided.  The miniature is of course a high quality plastic casting but has no extra components that tend to make up a lot of models from Games Workshop and it comes supplied with a detailed scenic base for the marine. 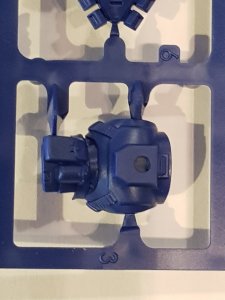 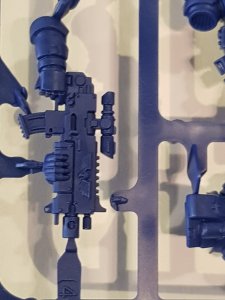 Animation of the marine is fluid and he is presented in a good pose almost looking down the barrel of his Bolter Rifle at an enemy.

Overall this is an excellent introduction to the worlds of Warhammer 40,000 and is highly recommended for both newcomers and experienced gamers alike.  I am sure that everyone will find something of use in the product and for its low price of just £5.00 it is a bargain.

Getting started with Warhammer 40,000 is available from all good game stores now and direct from Games Workshop.

All images copyright Games Workshop LTD used for promotional use only, all rights reserved.