Our good friends at Modiphius Entertainment have just posted a FREE quick start rules set for the awesome Star Trek Adventures roleplaying game. The PDF contains all the basic rules to get you going, as well as an introductory adventure, complete with pre generated characters! 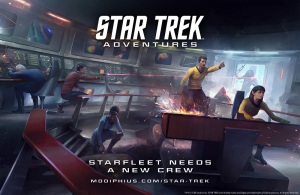 Released this week is our FREE Star Trek Adventures Quickstart which is the perfect introduction to start your adventures on the final frontier!

“We’ve received a message from Narendra Station that a runabout called the Susquehanna has gone missing in the Carina Nebula, deep within the Shackleton Expanse. The Susquehanna was investigating an unusual alien signal that originated from the nebula when all contact was lost. We have been ordered to enter the nebula, find the runabout, and determine the origin and cause of the alien signal. Starfleet has also advised that Romulan and Ferengi ships have been sighted in the region, so we should exercise caution since they may well have detected the alien signal as well.”

This is a FREE 30 page Quickstart for the Star Trek Adventures Roleyplaying game, and contains an introduction to the main game’s core rules, plus “Signals” a self contained adventure with six pre-generated characters for you to enjoy.

I'm a 55 year guy from Wigan in Lancashire living in Edinburgh, Scotland with two of my four awesome kids and my long suffering wife Laura. I have worked freelance over the years for some of the biggest names in tabletop and roleplaying and I am a very keen cosplayer and photographer.
View all posts by Marc Farrimond →
This entry was posted in Eye on Modiphius Entertainment, news, Uncategorized and tagged roleplaying, Star Trek. Bookmark the permalink.