Part work magazines used to be a very common sight on news vender shelves.  Each week the magazine would build into a volume that focused on whatever subject matter was in hand, often giving gifts to entice people to subscribe or buy the next issue.  Though they were very popular, they were also quite expensive, with the Titanic part work that allowed you to build a scale replica of that ill fated ship, coming in at over £1000 for the complete model!

Earlier this year, Games Workshop in partnership with Hachette Partworks released Warhammer 40,000: Conquest, a part work magazine that would allow new players and new comers to the hobby to build and collect either Space Marine or Chaos Marine armies for Warhammer 40,000!  The magazine came with information on that issues particular models, assembly instructions (though most of the models are plug and fit) and how to use them in your games.  Issue one had three Primaris Space Marines, a standard Games Workshop paint brush and three pots of paint, Abaddon Black, Retributor Armour and McCragg Blue! All this for the mere sum of £1.99, less than the price of a cup of coffee from some places!

Each issue would give either paints or dice and a miniature to add towards your collection and would be priced in the UK at £7.99!  Sadly however the run didn’t last very long and the magazine was cancelled after just four issues.

Now Hachette and Games Workshop are relaunching the magazine again, with a few added changes coming down the line.  The first four issues will be identical to the first time the magazine was available, but the magazines will now also offer other items such as vehicles and terrain! 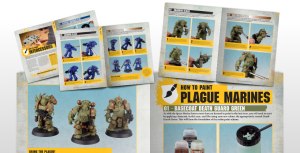 As part of your subscription benefits, one of your issues will be FREE and you will also receive five FREE gifts during the course of your collection.

Be completely satisfied, or your money back!*

Each issue comes with miniatures, paints or scenery and a fascinating Warhammer 40,000 magazine to collect.

Learn to paint with water-based paints and quality brushes following our clear guides.

We’ll teach you, in bite-size chunks, how to play Warhammer 40,000 with thrilling missions and exciting gameplay

As noted above issue one is just £1.99 and comes with around £20.00 worth of goods on the cover and if nothing else it is worth picking up if just for the paint alone!  My contacts with both companies say that there is going to be a big push behind this product (which given the news recently about Space Marine Heroes is very understandable) and don’t be surprised to see a television campaign for the magazine.  Hachette Partworks are well known for delivering quality magazines and graphic novels(such as the Judge Dredd Mega Collection) so the magazine should be safe in their hands.  However at the moment it still seems that the magazines will only concentrate on either Space Marines or Chaos Marines, which will rule out a lot of players, but given that some of the models presented are worth over £10.00 each its a snip at £7.99!

You can order your copies of Warhammer 40,000 Conquest directly from Hachette Partworks and should be able to pick the magazine up from most newsagents and retailers such as WH Smiths, Tescos and ASDA here in the UK.