Being an old gamer, and with the new release of Adeptus titancus, I decided to start crawling in the loft to find some old metal (and plastic) and see what still looks good.  With that in mind I grabbed an old box of epic spare marine minatures.

Opening the box on the table meant at one glance, that 1992 had returned! Once again I was going to be the Edinburgh League Champion and represent us in Derby at Games Day!!!!  But lo – it was not to be.  Time had ravaged on and reality once again reared its ugly head.

However…. I had a huge pile of these minature’s and had more than enough to create an entire chapter of Dark Angels!  Yes!!!! another project! but this one will be finished and not just gather dust on the shelf (Now that deserves an exclamiation mark! or two!!)

With the purchase of some Dark Green Humbrol acrylic spray paint from Wonderland, I was ready to begin. 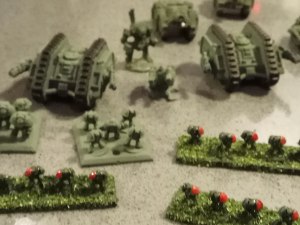 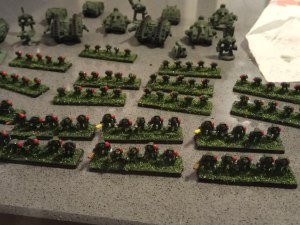 I have well over a thousand marines, old school Land Raiders and Rhinos from the original box set, Predators, Vindicators, a host of Dreadnaught’s, Land Speeders and even Jet Bikes, Tarantulas and Rapiers!

My Terminators were sadly facing every direction except forward, which clearly made sense when I was 16 but now kicked off a sense of outrage.  Only one thing for it…. Vanguard Minatures to the rescue!

With their fantastic 6mm range in sight on the laptop, I purchased a squad of erm… Novan Elite’s….. well I think these unique minatures could pass for Terminators…. what do you think?

These look absolutely awesome, and my next purchase is clearly going to be lots more Novan’s to mix in with my Marines and create the full Dark Angel Chapter.

I strongly suggest you check out Vanguard Minatures, especially if makings a 30k army as they have some of the best proxy’s on the market. 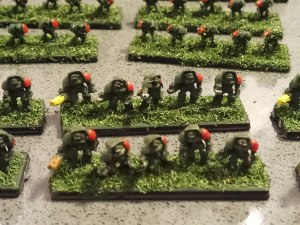 Next up, once I get through Vanguards range, will be Dark Realms games who also have a cracking 6mm selection.  Between them there are proxy options for Tyranids, Eldar, Orks, Imperial Guard, Adeptus Sororitas, and all the old favourites as well as Tau and Necrons.

Make no mistake, this is only post one of this work in progress as it expands so much I can no longer hide the vast amounts of plastic and metal from the wife (we have all been there, don’t fool yourself!)

I will be purchasing 6mm lookalikes going forward and putting them up here to show how they blend in with the old plastic and metal.

Check in from time to time as I dig through years and years of gaming goodies from the past! (and see how the very badly painted but still impressive Dark Angels Chapter comes along!)