Another sad day for Judge Dredd fans as we hear of the passing of veteran actor Scott Wilson at the age of 76.

Wilson is known to Judge Dredd fans as the canibalistic father of the Angel Gang ‘Pa Angel, in the 1995 Judge Dredd featuring Sylvester Stallone as the stone faced lawman.

Appearing in dozens of movies and countless television shows, Scott is best known to modern audiences as the father of Marg Helgenberger’s character Catherine Willows in CSI and more recently as Hershel in the hit post apocalypse series The Walking Dead!

He starred alongside such icons as Robert Redford Burt Lancaster, Steve McQueen, Deborah Kerr, Mia Farris, Scott Glenn,.Gene Hackman and countless more. He appeared in dozens of movies from In the Heat of the Night alongside Sidney Potier to Monster with Charlie Therozne and more.  The star of many hit television shows, often an important father figure, but rarely the lead. He recently appeared in The OA and the amazing crime drama Bosch! 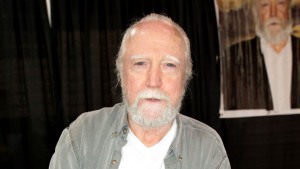 But it is as simple and mild natured Hershel Greene that he will most likely be remembered, a much loved character played by a much loved and extremely talented actor.