October has not been a good month, having lost Carlos Ezquerra at the start of the month and now we have just heard that games designing legend Greg Stafford has passed away!

Gregg was an old school games designer, having been working in the games industry since the early seventies.  Greg reinvented roleplaying and was the founder of Chaosium, publishers of Runequest, and of course Call of Cthulhu and countless books, novels and adventures.  Gregg also wrote his dream game in the form of Pendragon, a game set in the time of King Arthur and this was his baby.

I was lucky enough to meet with Greg on several occasions and had the chance to sit down with him over breakfast at Continuum in the early 2000’s and chat about his love of Arthurian lore and mythos.  A wonderful guy who was not only an amazing designer and writer but a honest to goodness gentleman.

Naturally the gaming world is in shock over this terrible news and below is what Chaosium Inc had to say. 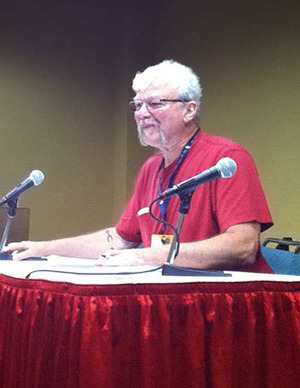 The shock and grief the Chaosium family felt at the news of the passing of our beloved and revered company founder, Greg Stafford, cannot be measured. Greg died yesterday in his sweat lodge at his home in Arcata, CA. Mercifully, his passing was painless and quick. He died as he lived, on a spiritual quest of enlightenment.

As one of the greatest game designers of all time; winner of too many awards to count; and a friend, mentor, guide, and inspiration to generations of gamers, “the Grand Shaman of Gaming” influenced the universe of tabletop gaming beyond measure.

Greg founded The Chaosium in 1975, and from the outset (to quote his own words) “was never content to imitate, but instead published games that were original in their style of play, content and design”. Under his leadership, the company quickly became renowned for its originality and creativity, and was responsible for introducing numerous things to the hobby that are standards today. As John Wick (7th Sea, Legend of the Five Rings) memorably said, “The older I get, the more I hear young RPG designers say ‘Never been done before!’ And then I just point at something Greg Stafford did a few decades ago.”

Greg’s work in roleplaying games, board games, and fiction have been acclaimed as some of the most engaging and innovative of all time. There will doubtless be many valedictory messages over the coming days from the countless people that Greg inspired and enthused across his many interests and passions – Glorantha, Oaxaca, King Arthur, shamanism, mythology and more.

For now, we leave you with the words of the Myth maker himself, speaking at the 2018 ENnies Awards ceremony, his last public engagement. Greg was immensely proud of the work Chaosium had done in recent years, particularly since his return as chair of the board in 2015. Ultimately, on reflection, he recognized that everyone’s success in the gaming industry was down to the enthusiasm and support of the fans. We at Chaosium recognize that countless RPG fans are fans (including us!) because of Greg Stafford and what he achieved.

Our heartfelt condolences to Greg’s wife Suzanne, and his children Noah, Alisha, Jason, and their families.

We have created a special Condolence Thread at BRP Central – The Chaosium Forums for messages from the gaming community of condolence, and remembrance, and celebration, about Greg Stafford.

If you would like to show your appreciation for his life and legacy, or express your feelings, or pay your respects, please feel free to leave a note there. Greg’s wife Suzanne and his family know that he was greatly loved, respected and revered in the gaming community all over the world, and they have the link to this thread to read your posts when they are ready. Greg’s family request that you respect their privacy in this time of grief.

Our deepest thoughts are with Greg’s family at this sad time, a true giant of gaming but a gentle one!