Nostalgia is a wonderful thing, it takes us back to a time when we had no real worries other than what was going to be number one in the charts that week, or those heady days when summers were long and hot and winters short, and it always snowed on Christmas Day!

Its memories that take us back to more innocent times and as such there is a huge amount of people around the world who flock to conventions to meet stars of shows and movies from when they were much younger.

This weekend Edinburgh plays host to Comic Con Scotland: For the Love of 80’s, a convention that features some of the biggest names from the 80’s television and movies, from shows such as The Incredible Hulk,  Battlestar Galactica, Doctor Who, The A-Team and cult movies like Flash Gordon, Gremlins, and even Ghostbusters!

This all takes place at the Edinburgh International Conference Centre (EICC) right here in the heart of Scotland’s capital, and while this is the first outing for organisers Monopoly Events here in Scotland, it looks all set to be a great show!

I was lucky enough to be invited to the press night, and was very excited about the question and answer session with these stars of bygone eras, even had some great questions of my own lined up.  Sadly due to an error on my own part, I had to return home before the event began and by the time I had crossed the city during rush hour on public transport, the press night was almost over.

Still I did manage to get to hear some great anecdotes from  Dirk Benedict, movie star and best know for his appearances as Face in the cult show The A-Team and as Starbuck on Battlestar Galactica!  Dirk regaled us with tales of his 101 year old mother and how she likes to have him light up cigars whenever he visits as it keeps her feeling young!

Sam Jones, best known as the titular character Flash Gordon in the hit movie of the same name had a constant running banter with Dirk Benedict, all lighthearted and in good fun.

One member of the audience asked if any of the guests had taken something home from the shows or movies they had worked on, to which Sylvester McCoy (a fan favourite here in Scotland naturally) mentioned he did get to keep his umbrella from his stint as the 7th Doctor in Doctor Who, and he also got to keep the fond memory of rubbing something onto actress Kate O’Maras chest, exactly what it was I couldn’t hear for people laughing.

Sam Jones had kept one of the original Flash tee shirts from the movie, now worth several hundred thousand dollars and he taunted Dirk about how much he could have made if he had kept his outfit from The A-Team, all again in great fun.

Sadly as I had arrived late, I didn’t get to ask any of my questions but hope to over the weekend.  One of the things I was going to mention was to wish Lou ‘The Incredible Hulk’ Ferrigno a happy birthday as it is his 67th birthday today, but I was beaten to the punch by the organisers from Monopoly bringing out a custom made cake for Lou and everyone sang happy birthday to this gentle giant!

I did manage to meet Lou after the event as he and Sam hung around for photos, and did something that I have never done in over thirty years of going to conventions, I had my photo taken with both of these amazingly witty men.  I am hoping to interview them both tomorrow.

Here are a few of the photos from tonight, my many thanks to Amy from Monopoly for all her help and support! 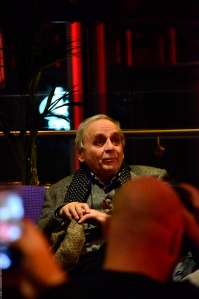 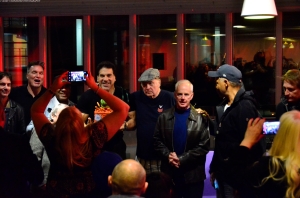 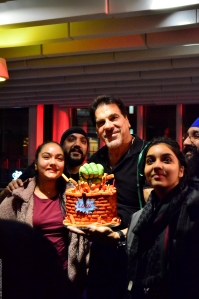 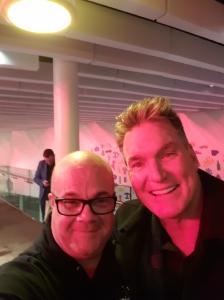 For the Love of 80s takes place this weekend, November 10-11th at the EICC Edinburgh.  Click HERE to buy tickets!