In the annals of Fantasy miniature games there is only really one name that stands head and shoulders above the rest, Mr Rick Priestly.  Rick has more games under his belt than most and is often seen as the father of modern tabletop gaming, having created or co-created Warhammer Fantasy Battle, Warhammer 40,000, Necromunda, Warmaster, and lets not forget Bolt Action and Beyond the Gates of Antares!  That is just the tip of the iceberg of the worlds of Rick Priestly and its about to get bigger with Warlords of Erehwon!

A brand new fantasy skirmish wargame from the mighty Warlord Games, Warlords of Erehwon looks set to take the miniature tabletop worlds by storm when it is released and so far little is known about this game, its worlds and even its system.  Given that this is from Warlord, I would imagine that the game uses a system similar to Bolt Action (if it isn’t broken don’t fix it) like Strontium Dog and the upcoming Cruel Seas.

Anyway what do we know?  Well the images of the first two sets feature Orcs and Skeletons, and harken back to old school fantasy, with the Orcs looking very much like Tolkien’s vision of the creatures, and the Skeletons could have come right out of a Ray Harryhausen movie! Take a look at the covers of the warbands below.  Also check out the sneak teaser videos and cover of the rules! 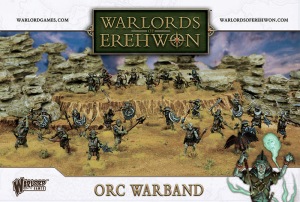 Both boxes contain 24 miniatures, which gives us three units of eight models each, a good starting point for building up a warband.  As for what the models are made from is yet unknown, most likely white metal rather than plastic but I would love plastic Skeletons so much!

Speculation
Just a few things that come to mind

There is a link on the videos to the website  which gives us a unique sign up for the news letter for the game which is pretty funny!

More news as we get it.  What do you think about these miniatures?  Let us know in the comments below!

1 thought on “Warlords of Erehwon Teased by Warlord Games”