Last week we learned of Warlords of Erehwon the new fantasy skirmish game by legendary designer Rick Priestley and Warlord Games. Now we finally have a few more details of the game and it’s release schedule.

Warlords of Erehwon transports us to the multifarious fantasy realms of fiction, folklore and myth, placing us at the head of a fighting force of our choosing. Model warbands clash across fantastical tabletops as humans and monsters, the living and the dead, war over the spoils of victory in a universe of heroes, sorcerers and the supernatural.

Our game has been designed with a single objective in mind – to allow us to play fast paced and exciting miniature battles upon a modestly-sized table between rival forces of that we describe as warbands. A warband represents your own band of warriors – courageous humans, blood-thirsty monsters, perhaps even minions that you have raised from beyond the grave to do your bidding.

Your force might typically comprise a few dozen models organised into loose groups of fighters, commonly five to ten strong each, or a single model in the case of chariots, giant monsters and war machines. This gives us our ‘warband’ style game, large enough to provide scope for scenario building, with plenty of opportunity to reward tactical play, but at the same time keeping things manageable in terms of the size of our forces and space required.

Warlord of Erehwon uses ten-sided dice providing for a game with mechanical depth and considerable adaptability. An intuitive universal dice test system means that play proceeds at a good pace once players are familiar with the core mechanics. A host of unique and entertaining attributes ensure that different creatures fight and behave after their own fashion, bringing their own mix of strengths and weaknesses to the fight.

The sequence of game play is determined by a dice-bag draw, and units are activated one at a time in a way that engages and challenges both players. A draw for your warband is an opportunity to launch your attack, or perhaps to set an ambush, maybe to seize a tactically important part of the battlefield, or to cast a spell and turn the tide of battle in your favour. Beware though – for whatever you do there is no guarantee that the next draw might not favour your foe – a Warlord of Erehwon must be prepared for all situations.

Force selector lists are included to represent the following warbands.

Dwarfs – Who do you think you’re calling short? Sturdy axe wielding maniacs with a heady dose of dour and tempers even shorter than they are.

Elves – Touched by magic and faster than a flying arrow, the Sidhe of ancient legend and races of popular fiction – all reside herein.

Goblins – Undersized and mean-spirited critters dangerous in numbers. Just don’t turn your back. Not for a minute.

Halflings – Pint sized humanoid creatures in the tradition of ‘the wee folk’. Remarkably accurate with any missile and deceptively innocent in appearance.

Olympian – The heroes and warriors of Greek legend together with their rivals and associates from myth and popular culture.

Monsters – our selector list provides for all the giants, dragons and other traditional fantasy monsters that can also be included as part of any warband. 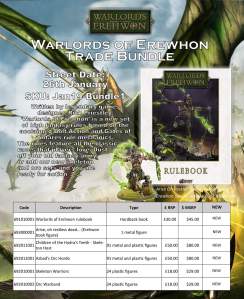