Pro wrestling is s sport that attracts millions of fans around the world every year.  From its over the top theatrics to its amazing superstars who personify the body beautiful. Wrestling seems to have it all, romance, drama, intrigue and the world of fantasy wrestling is little different!

Female wrestling teams are not uncommon in Rumbleslam, and some of the top names in the industry like Triple D and Jester are of course female and have millions of loyal and dedicated fans who cheer on their every move.  Hailing from Gomorrah, a casino well known for its low dealings and more, The Deadly Divas play to packed audiences every single day of the year and are famous for delivering high quality entertainment, often at break neck speeds.

In my unboxing of the Deadly Divas for Rumbleslam from TTCombat I had a look at the miniatures and the cards that make up the expansion and you can check out below.  Here on I will look at how to use the Divas in your games, ideas on what to do in the future and address anything that needs well, addressing. If you haven’t heard of Rumbleslam you can check out my review HERE

So the greasepaint is on and the lights are up and its a full house tonight, lets get ready to Rumbbbbbleslam with the Deadly Divas!

To be honest when I first saw Rumbleslam for the very first time at Aberdeen Comic Con (Granite City Con) in May 2017 I was pretty much impressed by the MDF ring and the wonderfully painted models, the two teams that were being used in the demostraitons from the guys at ATZ Games in Aberdeen where The Green Bruisers (who come in the two player set) and The Deadly Divas, and it was the latter that drew my attention right away.

Okay so I am male! Pretty looking female models have always been an interest and I love to paint them more than any other genre of miniature, and have had Amazon armies, almost entirely female Aeldari armies and even Sisters of Battle over the years, as well as amassing a huge collection of pin-up miniatures from 10mm right up to 1/6 scale over the past thirty years or so.  The female form is always something that I love in art work and I try very hard to emulate the attention to the gracefulness of the miniatures when I paint them.

The Deadly Divas are made up for four humans (High Flyer, Entertainer, Human Grappler, Human Brawler) and an Ogress, and look for every sense of the word, bad ass enough to kerb stomp anyone foolish enough to get into the ring with them.  Starting with the huge and imposing Ogress.  This is a generic fantasy character, bedecked in what appears to be a corset fitting body suit and complete with tusks.  The animation is perfect and the detail is superb, with even the lines of musculature under her boots being visible.  She is posed in a pretty static stance but mirrors her male counterpart (found in the Heavy Hitters team in the two player set!).  This is one lady you really don’t want to be on the wrong side of!

Joining her are the four other slender miniatures, and I did have a slight problem with the human Brawler as her foot came away from the model with no effort at all, I was simply taking it out of the box.  Of course its a simple enough thing to fix but needed pointing out.  High Flyer is posed quite dramatically, with one leg raised high and her ponytail trailing behind her as she moves quickly around the ring.  This model is a four part kit, consisting of the arm, body, leg and ponytail and goes together pretty straight forward with no need for filling.

The other three models are in quite static poses with the exception I guess of Entertainer who has her arms draping upwards around her body in a come get me pose.  Sex sells as the saying goes so why not use it as weapon against weak willed male opponents?

On the whole I was really impressed with the Deadly Divas set, with High Flyer really standing out from the group.

As for game wise!  Well If you are looking to dish out a lot of quick actions and fast paced game play, this could be your team!  Each character can move pretty fast when they need to, and if you manage to get Entertainer to pull off her Crowd Pleaser it can really act as a buff for all of the Divas and allow one other Diva to pull her Crowd Pleaser off as if she had passed!

Being fast is one thing in Rumbleslam and if you can run your opponent into the mat all the better.  Ogress is very tough and hard as nails to take down and she rolls some pretty powerful dice too, but its her Crowd Pleaser that gives all of the Divas a +1 DEF until the end of the round that makes her an invaluable wrestler and one to watch out for. 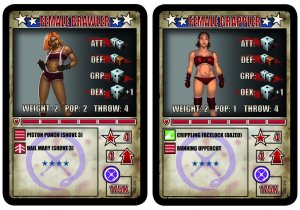 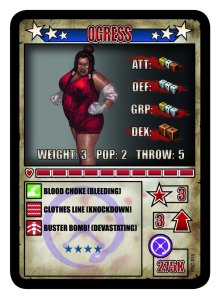 Ogress aside, the Divas are a bit of a let down when it comes to taking punishment and it could all be over before you know it, with only Ogress still in play.  Use the high movement to your advantage and keep your opponent on the back foot trying to keep up, use rope attacks and some of the deadly airel attacks to full advantage, but don’t be afraid to fire and retire as its the best way to keep the Divas in the game for longest!

I plan on creating a tag team using Ogress and Ogre and will knock up some cards for them soon, as they would make a great husband and wife partnership tag team, taking out their petty bickerings in the ring.  Imagine a huge Ogre who is hen pecked by his wife and you are not far off the mark!

So thats a quick look at the Deadly Divas for Rumbleslam.  You can get your Deadly Divas from TTCombat at the link below and from all good game stores everywhere.