He is one of the most famous characters in science fiction and much loved around the world, even though nobody can understand a word he says! Chewbacca or simply Chewie is iconic to say the least.

Enter Star Wars Legion from Fantasy Flight Games and its ever growing roster of famous Star Wars characters.  It was obvious that eventually Chewbacca would be covered as one of the heroes of the Rebellion (though not actually a rebel himself, more drawn into the conflict by Han Solo) as the character fought side by side with Luke, Leia and Han and of course was instrumental during the battles of both Yavin 4 and Endor!

Star Wars Legions version of Chewie is really going to turn the tide of battle once he hits the table top.  He has masses of health and can take wounds directed at his close allies, which will grant him bonuses and give him fury.  The more wounds he takes, the tougher he becomes! On his own he is a force to be reckoned with, team him up with another hero and he is almost unstoppable! 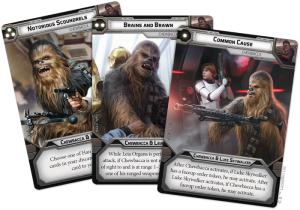 Chewbacca of course is an excellent engineer and co-pilot and extremely loyal to his friends.  He will put himself in harms way to save someone he cares for and the cards reflect this perfectly.

Joining Chewbacca will be a unit of Wookies who will add extra strength and muscle power to your Rebels and much more.

Both Chewbacca and the Wookies Expansions will be available in early 2019 and are both now available to order from Fantasy Flight Games directly, or your local games store.  Gamers Web recommends 6s2hit.com for great value and up to 25% discount on retail prices!

1 thought on “What a Wookie! Chewbacca previewed for Legion (Fantasy Flight Games)”