James Bond had Ernst Blofeld, Sherlock Holmes had James Moriarty, The Batman has The Joker and even Dexter had Mandark, every hero needs a foil, a nemesis who keeps them on their toes. While most have but one main antagonist, there is one who stands out!

Lots of shows have recurring themes and that of a returning villain is one of the most common motifs in film and television. The villain is often just a bad guy who has escaped justice to return again at some later point and cause havoc.  However there are some foes who are on equal footing with the protagonist, those who are equal in intellect, ability and skill, and pose a much greater threat.

Doctor Who is the world’s longest running science fiction series, having been around for over fifty five years, and it’s titular character has no end of foes that he has faced over that period, some are gone in a single episode, while others may return again at some future story, but of all his many foes over the decades , two have not only returned time and again to pain the Doctor, but have all but bested him on several occasions, Davros and The Master!

Creator of the dreaded Daleks Davros!

Davros is the Kaled Scientist who created the most evil beings in existence, the dreaded Daleks, a race whose pure existence is to eradicate and exterminate every other race in the universe. Davros is bitter and twisted, his body long since destroyed by an enemy shell during the thousand year war with the Thrall race on the planet Skaro, and has to utilise a special life support chair to allow him to move, without which he would surely die within moments.

His hatred and anger passed on to his creations and while some of his subjects would worship him like a deity, other factions among the Daleks would condemn him to the same fate as the rest of the universe, extermination!

A genius whose evil overshadows his brilliance, Davros has faced off against The Doctor many times over the years, but always been eventually beaten by the Time Lord.

Davros is a formidable foe, despite his disabilities and if it were not for his sheer hatred of The Doctor, he may actually succeed in his goals.

But he is not alone! Alongside Davros there stands another enemy of The Doctor, one whose intelligence not only equals his, but has the cunning to pull off truly daring feats. If The Doctor represents light and hope, then his counterpoint is to be found in the renegade Time Lord know simply as The Master! 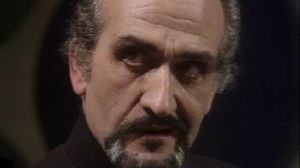 The Master as played by the late Roger Delgado

No other foe has come as close to destroying The Doctor as his childhood friend. The two where closer than any brothers could ever be at one point, but when the child who would go on to become The Master gazed into The Untempered Schism and it implanted a sound into his very psyche, the four chambered beating of a Time Lord heart, this would only serve to drive him further and further into insanity due to its constant presence.

While The Doctor and The Master were like brothers, they did follow divergent paths. One would try to right the wrongs of the universe, while the other would attempt to rule it or at best destroy it!  Both are two sides of the same coin, and on occasion have teamed up to defeat a more imminent threat.

The Doctor is not the only Time Lord to wear many faces over the years, as a fellow Time Lord The Master has the same ability to regenerate and has done so many times and his last incarnation saw him switching not only faces, but genders, and The Master became The Mistress or Missy for short! 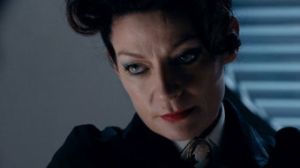 Warlord Games released their Doctor Who: Exterminate The Miniatures Game  in 2017 and the game has many expansion sets which allow you to add more flavor and elements to your games and this review will take a look at the Missy and The Cybermen and Davros and The New Dalek Empire expansion sets!

Here is my video of the miniatures and cards, and below is my thoughts on the expansions.

Ladies first and a look at the Missy and The Cybermen expansion. This boxed set comes with a white metal miniature of Missy as portrayed by Michelle Gomez, twelve plastic Cybermen, fourteen plastic Cybermats, ten Recruitment cards, eight Adventure cards and a painting guide while also doubles as an assembly guide! 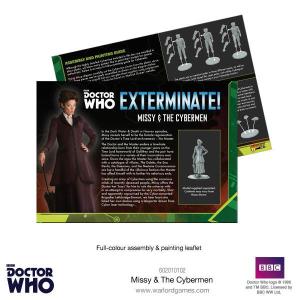 The assembly and background guide for Missy and the Cybermen 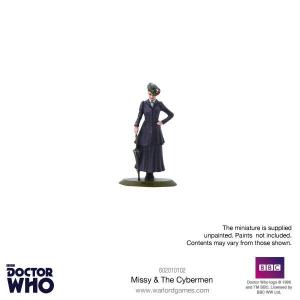 I am not going to go into detail here about the Cybermen or Cybermat models as they have already been covered in my review of the core game, but I will take a look at their cards.

Missy is a single cast white metal miniature sculpted in her Edwardian style Mary Poppinseque dress and hat (phew try saying that four times fast!) complete with a parasol.  She is in a fairly static pose with very little fluidity to the animation, but you can tell instantly that it’s Missy, the sculpt does a great job of capturing Michelle Gomez’s likeness, though she does appear on the small side if you put the miniature against others in the range.

Although the model has an integral base, Warlord have provided a plastic base to mount the model on. This will allow the miniature to fit in with the Cybermen models and of course the rest of the range.

The second model in this review is going to be Davros as like Missy his expansion comes with twelve plastic Daleks which I have already covered in the same review.  So lets jump right in. 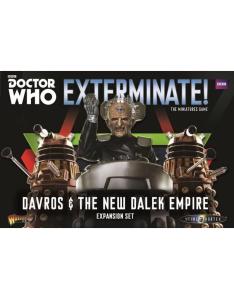 The assembly and background guide for Davros and the Daleks

Davros is a multipart kit, that comprises of a the lower Dalek body, main body and and the back support.  A simple enough kit to put together and though it is again a pretty static pose, its far to say that it is perhaps the best likeness in a miniature of the character to be released so far.

The face looks like a portrait of pure evil, contorted with pain that it uses to fuel its anger, which in turn fuels its desire to destroy.  The lower body is the Dalek base into which Davros’s body fits in.  This is chassis comes complete with the control panel and of course those iconic Dalek bumps that make the race so distinguishable.

All in all its a pretty great likeness but there is not much one can say about either a Dalek or Davros except that they look the part.

These miniatures are great and will fit in with the rest of your forces for the Doctor Who Miniatures Game, though its their cards that make them really stand out in game play!

Gents first this time around and Davros comes with some pretty nasty cards, as well as his Dalek retinue.

Davros has a Move 6, Resilience 3, Melee 0, Firepower 1, with him being a unique character (meaning you can take only one in your faction) Wounds (2), and the Hold Back, All Hope is Lost, traits, he is also equipped with and Energy Pistol, and the Escape Plan, and the My Children Adventure Cards.

Escape Plan basically allows you to ignore an extermination result on one of your characters during play, which really could come in handy. My Children acts like a teleport of sorts and allows you to move up to three Daleks that havent moved into base contact with Davros, this can give him more or less a permanent bodyguard!

Missy is also pretty formidable when she is in play, especially when shes teamed up with something sinister like the Cybermen or Sea Devils.  She has a Move 6, Resilience 4, Melee +2 and Firepower 0, and Missy comes with the following traits Unique, Wounds (2), All Hope is Lost, and is armed with the Multipurpose Device and Tempus Fugit Adventure cards.

Multipurpose Device when used causes all miniatures within 4″ of Missy to act as if they have been activated on the turn its played, which could lead to some very interesting sitituations in combat. When used as a weapon it has a range of 6″ and a Firepower of 3 and causes Shock.

Tempus Fugit allows Missy to attempt to negate the actions of any Adventure card when played.

I know I said I was only going to look at Missy and Davros in this review, as both of the other miniatures have been covered in my review of the game, but I will take a quick look at the cards that come in both sets for the Daleks and Cybermen.

The Daleks get some pretty neat cards which include, The Cult of Skaro, Emperors Guard, Patrol Leader, two Dalek Patrols, allowing the Dalek player to field a total of 17 Daleks from this set alone.  They get cards that upgrade their defense and attack such as the Dalek Science card which creates a cloud of poisonous gas that affects all organic life in an area and makes them instantly Shocked.

The Cybermen get roughly the same deal as the Daleks allowing them to field 19 Cybermen from the set (of course both sets only have twelve models but you will have more from the core game folks), including a Cyber Leader and lots of Cybermen with Fate tokens!  They also get upgrades to their Move and Melee which make them super deadly in combat!

Overall both of these sets will make a great addition to the Exterminate game and help expand on your collections considerably. Missy is well worth picking up as The Master often allied with alien races or creatures to fulfill his evil machinations. Davros however is the best choice due to the amount of firepower the Daleks can bring to the table.

Both expansion sets are available now directly from Warlord Games and from all good game stockists everywhere.