Continuing my look at the excellent miniatures for the Doctor Who Exterminate Miniatures Game from Warlord Games.  Today I will be taking a look at the Fifth, Eleventh and Twelth Doctors Expansion pack.

With over fifty-five years of back story, hundreds of hours of episodes and some of the most memorable characters in television history, Doctor Who has become a global phenonmia and is much loved by millions of fans around the world.

William Hartnell, (the stoic actor who was the first to enter the strange police box that could travel through time and space) became to ill to continue in the role, which was at the time was sailing really high with viewers in the UK.  What do you do when your lead actor is too ill to continue in the role that makes the show famous?  If you just replace him, the viewers will not be happy.  But Doctor Who is and always has been a show about defying the odds and being science fiction the simple idea of having the Doctor be re-birthed into a younger body was hit upon and the rest is history!

Since its first broadcast in November 1963, the Doctor has been through many looks and has been played by over a dozen actors on screen, each bringing their own uniqueness and talent to the role, and in turn each has been loved or loathed by fans.

There is a saying currently doing the rounds which really doesn’t concern Doctor Who, but is pretty apt.  ‘Not My President!’

Sure there have been a lot of actors who have traveled in the blue box down the line, but not everyone likes them all and a lot of people have their own Doctor, normally the one that they grew up watching.

Doctor Who was shelved in the late eighties following a rating slump and it would be many years before the character would return to our screens with a made for television movie that pretty much bombed due to its overly Americanisation of the character (even though played by a stalwart British actor), but it wouldn’t be until 2005 till the show was relaunched and revamped that the world would fall in love once again with the strange madman in a box!

When Tom Baker stepped away from the role of the Doctor, it was a very hard act to follow, with some very, very big boots to fill, not to mention that scarf!  By this time we had become used to the idea of the Doctor changing when the actor wanted to move on, and this had now been given a name ‘Regeneration’, and with each regeneration came a new approach to playing the character. 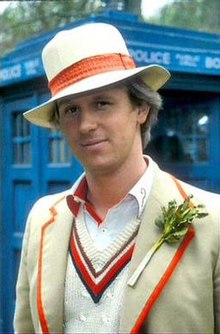 Taking over from Tom Baker in 1982, Peter Davison would go on to play the character for three seasons, covering almost seventy episodes.  Davison was no stranger to television, having played the character of Tristan on the hit drama series ‘All Creatures Great and Small’ for almost as long as he would go on to play The Doctor.  He was at the time the youngest ever actor to play the role, and brought with him what can only be described as a sense of Britishness if such a word can be used.  Davison’s portrayal of the character was one that had him dressed in cricket gear for the majority of the time, a game that is very often associated with being quaintly British (well English I guess) by most of the world, and carried with him an air of vulnerability that had not been seen in the Doctor before.

Gone was the whimsical and funny approach that Tom Baker had given in the dozens of episodes previously, an almost childlike portrayal, occasionally tinged with a sadness as if he had a great weight on his shoulders.  Davison was more like a school boy in his approach, eager to learn everything, but when needed his youth was pushed aside and the old Doctor shone through! 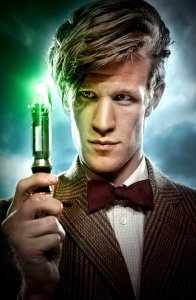 The Eleventh Doctor was played by Matt Smith, a relative new comer to the scene and the youngest ever person to play the title role (he is four months younger than Whittaker) Smith brought with him a quirky and almost childlike attitude in his performance and was dubbed as The Raggedy Man by his first companion Amy Pond, partly due to his gangly appearance but mostly down to his quirky way of acting. Smith channelled the spirit of Second Doctor Patrick Troughton, almost down to his dress style.

Smith did more for sales of bow ties and fez’s than anyone else in the history of television and though it was a tough act to follow taking over from Tenth Doctor David Tennant, he not only managed to win fans over, he blew many away!

Smith would play the role for three seasons which seems to be a very reoccurring theme in Doctor Who, and left the show for the bright lights of Hollywood!

While Matt Smith was the youngest to play The Doctor, his replacement wasn’t by a long way. Taking over from Smith in 2014, Scottish actor and director Peter Capaldi would take the character in a new direction, but somehow manage to still remain very familiar to Third Doctor Jon Pertwee. Capaldi was a natural to play the Timelord and even going as far to get published in the iconic Doctor Who magazine as a child. He was far more serious than all of the previous Doctors since the shows revamp in 2005, and his first season brought a much harder edge to the Doctor, it wasn’t until his final season did he really begin to mellow.

His dress sense was a mirror to the Third in more ways than one and he was often seen in a Victorian frock coat, smartly dressed. Gone were the Converse trainers and bow ties, this Doctor meant business and his dress sense showed it for all to clearly see. Also for some reason the show runner Stephen Moffat decided that this Doctor would loose his famous maguffin the sonic screwdriver and it would instead be replaced with sonic sunglasses!

Capaldi would leave after his third season and make way for the first ever female to play the character in the form of Jodie Whittaker.

The Fifth, Eleventh and Twelfth Doctor Expansion contains three highly detailed single cast resin miniatures for use in the game and comes once again packaged in the stylish plastic box that features the embossed Galyfrayan symbol. 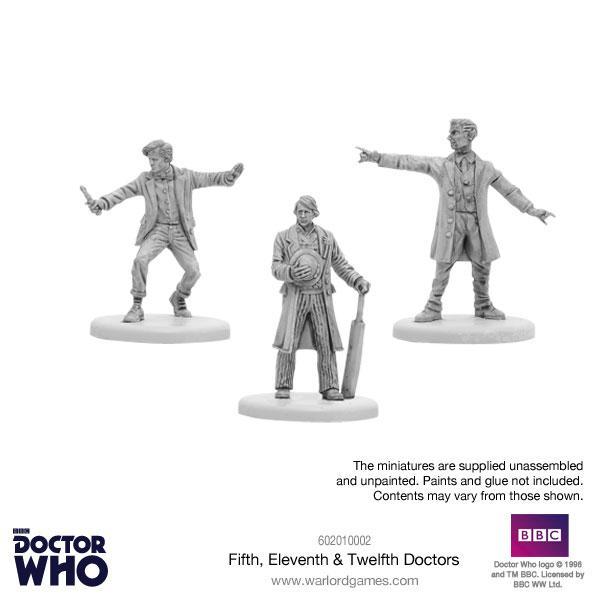 The Fifth Doctor is posed holding his cricket bat in one hand and his hat against his body in the other. The detail is superb and this is a very close resemblance to Davison.  Dressed in his long frock jacket and wearing his famous jumper, the only thing missing is a piece of celery on his lapel!

Posing is fairly static but good, with clear lines of animation which are relying on the stillness of the character rather than action.

The Eleventh Doctor is posed in a much more dynamic stance, almost like a fencer would do in a riposte, one arm outstretched and using his trusty sonic as a foil. Depicted wearing his iconic outfit that he was to wear for most of his run, this miniature has amazing attention to detail and is perhaps the best of the three.

The Twelfth Doctor is again in a more dynamic pose than the Fifth, with hands outstretched as if he is taunting a foe.  Dressed in his Victorian frock coat, this will be a joy to paint, though sadly for some reason the side of the face of the model I have was a little miscast, but it is still undeniably Peter Capaldi.

The pack also comes with a set of cards for the miniatures game, with stats for each of the Doctors, as well as Doctor specific cards, all of which have great effects during play, and I love the card for the Twelfth Doctor ‘Attack Eyebrows!’

We will have more articles and reviews on this excellent game coming very soon to Gamers Web, and our first walkthrough of a game will be for this one very shortly as all the miniatures are now ready to play on camera.  Please like and share our video as it helps our channel grow and subscribe to get the latest updates.

available now directly from Warlord Games and from all good game stockists everywhere.