There is one thing that we never have any control over here in Scotland is the weather!  We make jokes about it all the time but truth be told it can get pretty lousy and miserable at times.

This weekend saw the annual pilgrimage to one of Scotland’s finest conventions, Edinburgh Comic-Con and even though the weather was awful, it still did little to dampen the spirits of the thousands of people who turned up during the weekend to meet stars of film and screen, dress up and have a great time! And rightly so!

Once again ECC returned to the Edinburgh International Conference Centre (EICC) for its fourth year in what has now become its home ground, and as always the show was a resounding success.

The brainchild of James Lundy, ECC has grown significantly from its humble origins above a bar to a huge affair that takes dozens of folks to make sure that everything runs just right and that the public gets the best show possible.

With guests from the world of television and film, comic books and more, the con has gained a good reputation for being a family based affair and offers something for everyone, all under the one roof, and we did need a roof this weekend due to the torrential rain that fell from Friday night and didn’t ever seem to stop.

As always there were a lot of things on during the event, from talks given by the stars of Buffy the Vampire Slayer and the cult movie Akira, to the cosplay masquerade and much more.  The hall was once again filled with props ranging from ET on a bike, too a full-sized Star Trek Transporter pad, and a life-size TARDIS!  All these props were made free to take photos with and perhaps one of the most popular was the huge Pop Vinyl box that people step inside and pose for photos.

Though the one thing that really stands out at Edinburgh Comic Con is the cosplayers and the amount of time and effort they put into their costumes.  I have been lucky enough to visit many cons in many cities but have to admit that my home city often seems to rise to the challenge and go way beyond it at times.  Some truly awesome costumes, and perhaps my favourite of the entire weekend was two young gents who were dressed as David Bowie and Freddie Mercury (complete with mic and stand) who really owned the part they were playing.

Saturday was hectically busy and at one point it seemed that the trade halls would combust with the amount of traffic, then suddenly it all seemed to vanish away again as if nothing had happened.

The guests kept folks entertained by signing and posing for photos with their fans, and Buffy star Nicholas Brendan had huge queues for most of the weekend and proved to be very popular.

The Saturday evening saw the aftershow party which was hosted by myself, but due to a final venue change at the last moment and terrible weather, it was very low attendance, but all who did turn up had a great time and each went away with a prize of some description.  The highlight of the evening was sharing time with Joshua Seth (Akria, Digimon, Ghost in the Shell), Indigo (Buffy the Vampire Slayer, Family Guy, Weeds.), and Iyari Limon (Buffy the Vampire Slayer, Dead Space, LA Noire) being at the party which was then more of a relaxed and intimate thing, and Joshua proved to be a huge hit with everyone with his stage theatrics that would put Derren Brown to shame.

Sunday was a little more relaxed and not as huge a turn out as would normally be expected due mostly to the terrible weather we are currently having.  However, the weather didn’t dampen the spirits of the attendees and everyone seemed to be having a great time!

As usual, the 6s2hit/Mox in the Hole crews were on hand with a huge selection of games for folks to play, from X-wing 2nd Edition and Star Wars Legion to Magic and more! Lots of young folks got taught how to paint miniatures for the first time too, as well as learning new games. 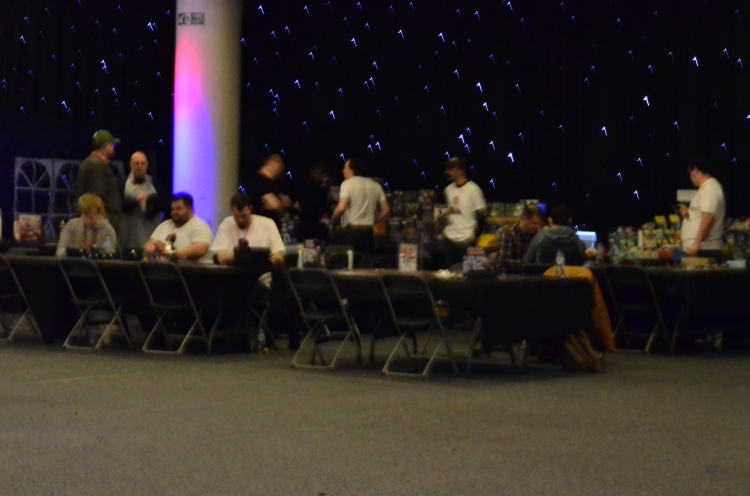 The Nerfery were also back with their Nerf shooting range which folks could try for a small charge, and had some great custom Nerf weapons for sale too!

Rebel Legion (Star Wars), UKCM (United Kingdom Colonial Marines, Aliens) and Ghostbusters of Glasgow where all on hand with screen actuate props and costumes, and ready to sign you up to save the world/day and generally chat about their love and passion for their movie franchises respectively.

A con without a photo booth is not really much of a con at all these days and thankfully ECC has one of the best photographers on the con circuit in the UK in the form of the lovely Jolanta Pawiicka who seems never to stop taking her amazing photos for punters and stars alike.  Helped out by her fiance con host and actor Des O’Gorman, I guess they say little of the con itself this weekend given how busy there were every time I passed by.

Loads of Q&A panels with the stars over the weekend, including a panel with all the Buffy stars, a panel by the awesome Joshua Seth before the screening of the legendary anime movie Akria in which he was the voice of the character Tetsuo.

The worlds of comics were not forgotten as Edinburgh Comic Con is one of the only cons that actually has a large presence of comics, both old and new, independent and mainstream. Great guests too some amazing artists and writers, with two legends leading the pack in the form of comic book writer and scribe Gordon Rennie and the living legend that is artistic par-excellence Colin McNeil, both of whom cut their collective teeth on 2000AD.

So much to see and do, especially with how terrible the weather was outside throughout the weekend, and I was lucky enough to manage to take some photos of some awesome cosplayers over both days.  My many thanks and heartfelt gratitude goes out to everyone who kindly let me take their photograph.

Click the link below to see my gallery and please feel free to share and use any images.but if you do so please credit Gamers Web.or Marc Farrimond thanks.

For some reason a few people are having problems seeing the gallery and getting just a screen shot, if you click on the link below it should take you there now!

More images from the Marvel shoot will be up very soon.

So that’s it over for another year and once again much kudos goes to James Lundy and his crew of extraordinary talented helpers who worked behind and in front of the scenes to make everything run smooth as silk! Without their tireless work and dedication there would be no convention!

So just another year to wait till Edinburgh Comic Con rolls around again, just time to plan another costume.