Han Solo (pronounced HAHNN by some or HARN by others) is an iconic character from Star Wars, having appeared in five movies in the franchise and having dozens of stories and novels based upon the character and his adventures. 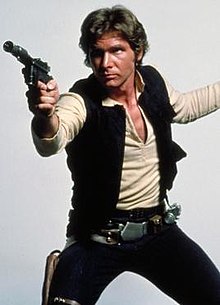 From a two bit grifter on the planet of Corellia, to helping blow up the first and second Death Star, and finally to his fateful encounter with his estranged son Ben Solo, the character has had more than his far share of things over the years, but often found himself on the wrong side of the law, or worse  yet a blaster!

Played by Harrison Ford with a cocky attitude, Han Solo is a legend in the annals of science fiction and the characters dry sense of humor and banter make him stand out from other run of the mill heroes in most other movies.

Ford was very reluctant to reprise the role that cemented him as one of the biggest stars in Hollywood, for fear of typecasting, and expressed his desire for Solo to be killed of permanently during Empire Strikes Back, instead he was just frozen in carbonite in a heartbreaking scene that left audiences wondering if they would ever see the smuggler again!

Of course we did get to see Solo again in The Return of the Jedi, and a few decades later in The Force Awakens, which was the final swan song for the character.  That is unless you class the prequel simply titled Solo (with a different actor and set long before A New Hope) as the swan song of course!

In the expanded universe Solo is a much more fleshed out, being the father to Jacen and Jaina Solo, with his wife Leia Organa Solo, and a younger son Anakin Solo.  Of course the new movies retconned this and we got uber emo Kylo Ren or Ben Solo instead!

Throughout his adventures, both cannon and none alike Solo was never far away from Chewbacca the Wookiee and the pair are among the most iconic in cinema history.

He is an amazing pilot and his brag about making the Kessel Run is legendary and rightly so given how dangerous it actually is.  A excellent marksman and shot with almost any weapon and more than one unfortunate who has crossed paths with Solo has not lived to tell the tale. Now this legend of Star Wars is aavailable for Fantasy  Flight Games excellent Star Wars Legion miniatures game, you can check out my video unboxing below!

In Legion Han Solo is an all around good character to field.  He is only 30 points more than Leia coming in at 120 points and 40 less than Luke.  If you take Han as your force commander and add Chewbacca as a specialist character, both can buff each other’s performances during gameplay.  Chewie allows Han to redraw a discarded card and place it back into his command hand.

He is armed with his trusty DL 44 Hold Out Heavy Blaster which hits on two red dice and has Pierce 2.  Add this to his Gunslinger and Sharpshooter traits and you have a rock solid leader for your rebel forces.

Han Solo is iconic on the tabletop as he is in the movies and can really turn a battle.  An ideal addition to your forces and a good commander to choose instead of Luke or Leia.

The Han Solo Commander Expansion is available now from Fantasy Flight Games .  Gamers Web recommends 6s2hit.com for great value and up to 25% discount on retail prices!