The self dubbed ‘Best Four Days in Gaming’ begins in Indianapolis tomorrow as one of the largest game shows in the world ‘Gen Con’ takes place.  There a lot of companies who do previews of upcoming products throughout the show and sometimes a company may forgo the reveals at the event and drop its news in a live conference the day before.

As I write this update, it is currently 4 am here in the UK and a short while ago Fantasy Flight Games just live streamed their own plans for some of their key products for the rest of the year and into 2020!  While the live stream had a few hiccups (I had more lag than being on a dial up connection at one point!), Andrew Navaro the head of Fantasy Flight Games showcased several really great looking products coming our way very soon, including an all-new Marvel Champions card game.

I will cover the Marvel game and other news tomorrow but wanted to get down the stuff that is most important to something I love which is Star Wars Legion.

Navaro put rest to the rumors that Legions new core set, the Clone Wars would be available to buy at Gen Con for those lucky enough to be able to attend the convention this weekend, and also gave us some sneak looks at upcoming products for Legion for the next few months.

As well as the already announced core game, B1 Battle Droids Expansion and Phase 1 Clone Troopers Expansion which will be out in the next few weeks (most likely September) some other great new items were shown off.

First up was the first two Commander expansions for the Clone Wars era Clone Captain Rex for the Galactic Republic and Count Dooku for the Separatists. Both miniatures look amazing and the Dooku has a really good likeness to the late and very great Sir Christopher Lee (one of my childhood heroes and favorite actors of all time).  Both expansions will ship Q1 2020.

Next up was the first all new units for the Clone Wars era in the form of the Phase 2 Clone Troopers and B2  Super Battle Droids. 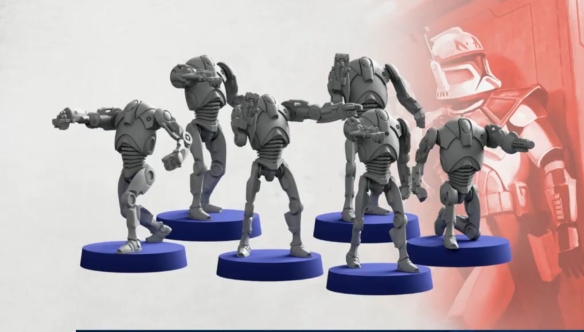 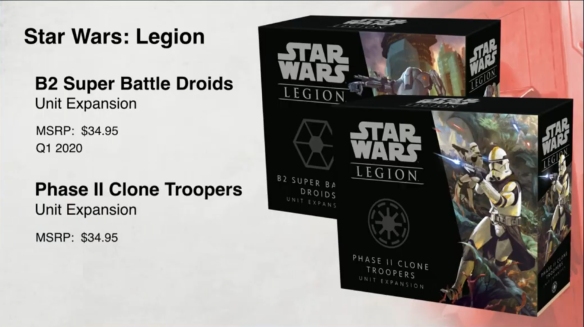 The Phase 2 Clone Troopers will come with a standard squad of seven miniatures and feature heavy weapons options and will be customisable, which I assume means having none helmeted head options as one is shown in the image during the presentation.  As only the assembled models were shown, it is uncertain if these will be multipart kits as in the new core set, but I would certainly assume so.

The B2  Super Battle Droids.will come in a unit of six models and at least one miniature will be kneeling while firing.  B2’s in the movies were pretty tough and more than made up for the shortcomings of the less powerful B1 Battledroids.  Both expansions will ship Q1 2020.

Next we were treated to something that has been speculated on forums ever since the new core set was announced and it was finally confirmed by Andrew that we will be getting now one, but two tanks for the Clone Wars era. 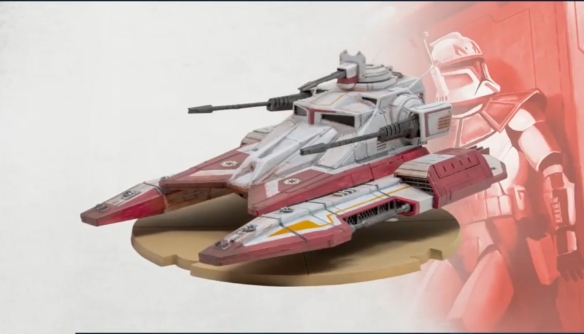 First up is the TX 130 Sabre for the Republic which looks like a very dangerous predator indeed and is armed to the teeth. This tank is used quite a lot in the Clone Wars animated series and the options for painting this up will be amazing.

The Separatists will also get a tank in the form of the AAT Trade Federation Battle Tank (which I was, funnily enough, building an old unbuilt AMT kit of while the event was taking place).  This tank features heavily in both the prequel movies and the Clone Wars animated series.

The original core set has not been neglected and Andrew did confirm that more would still be coming out for it and teased two brand new terrain expansions that will be launched in Q4 2019.

First up was the Imperial Bunker as featured in Return of the Jedi, and is a real step up from the dozens of 3D printed ones you can find online!  The roof of the bunker comes off to reveal a detailed interior that can be expanded by placing two of the bunkers back to back! 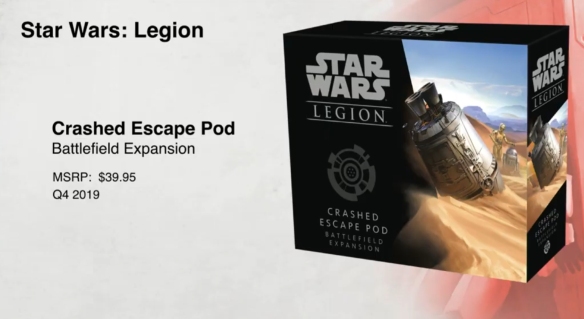 The second new terrain feature was the Crashed Escape Pod as featured at the start of A New hope and also will come packaged with R2D2 and C3PO, two of the most famous characters in the history of cinema!  Both of the droids will be useable in either core set as they are the only two characters that appear throughout every single movie and show to date!

Both terrain features will be out in Q4 this year!

Hopefully, the images will look okay as I had to use my phone to capture them as my connection to the live stream was pretty bad. I will try to cover the other key features tomorrow.