Anyone who knows me will tell you that I am all about the gaming!  I have been involved in games for a long time now, being a wargamer for fifty years, a roleplayer for well over forty and also worked in the industry for several years.

Gaming is not just about sitting down for a couple of hours just to pass the time of day, its a social interaction with others that can often lead to life long friendships and I am very pleased to say that a very large number of my dear close friends I met through gaming in one way or another!

This social interaction can make games perfect as a learning tool and it is little wonder that many companies employ firms to teach their key staff interaction via the use of roleplaying situations!

Why do I mention this?  Well a while ago I was introduced to a very remarkable gentleman who has just launched a kickstarter that will hopefully reach its funding goals.  Joshua Seth is an actor, being well known in the worlds of anime for his voice work on such dubbed classics as Akria and Yu-Gi-Oh and is also a motivational speaker, talented comedian and magician to just touch the surface.

Now Josh is adding games design to his long list of impressive accomplishments as he launches his kickstarter for Creativity Cards: The Game!

I will let Joshua explain more himself! Hi friends! I know you haven’t heard from me in a while. And that’s because I’ve been in creativity mode. Top Secret stuff you know. But now I’m ready to share it with you…

I’ve been working for the past few months on creating a card game.

WHY A CARD GAME?

Well, I’ve written 3 books and was intending to write another one to include my thinking about creativity and innovation, which is the subject of my current keynote speech.

But then I thought…

“You know what, a book isn’t really an innovative way to present this material. Every speaker has a book. How many have their own card game?”

And so, after months of burning the midnight oil, Creativity Cards: The Game That Sparks Innovation™ is born. 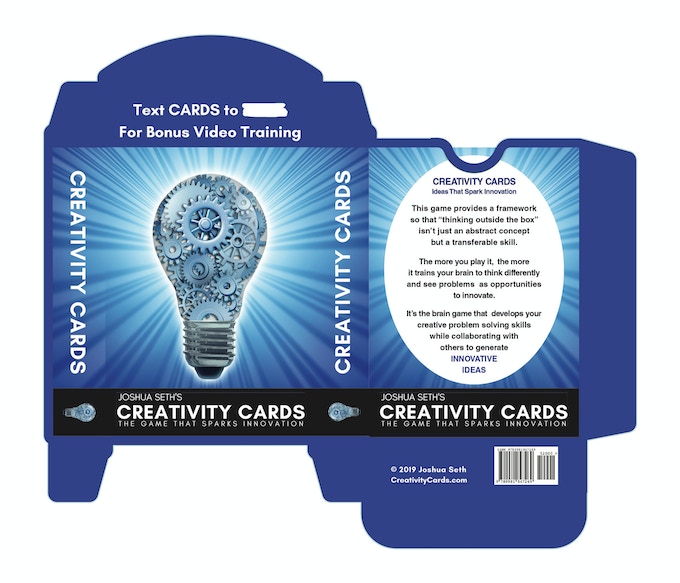 I’m introducing this card game as a Kickstarter campaign to test it’s viability in the marketplace. If you guys don’t think it’s a good idea then it won’t get funded and I’ll go back to the drawing board.

But if you think it’s interesting enough to support with a $20 investment and share it with your friends on social media, then I’ll know I’m on to something and will make the investment in actually printing them up.

WHO WILL BENEFIT FROM PLAYING THIS GAME?

It takes a lot of the work out of creative problem solving and turns it into an easily learnable skill that can increase the profitability of any business that applies it and the value of person who masters it.

That’s because businesses need to innovate. But innovation starts by having ideas worth developing. And sparking those ideas requires creative thinking strategies.

That’s where Creativity Cards: The Game That Sparks Innovation™ comes in. It’s the brain game that develops your creative problem solving skills so you can generate the kind of outside-the-box ideas that drive innovation, and actually have fun doing it.

The success of this Kickstarter campaign depends 100% on your support. If it’s not fully funded, your pledge will be returned to you. So there’s no risk to you.

But if we do get enough pledges to fund this project, then you’ll play an important part in demystifying the process of creativity and innovation and get a really cool card deck too!

Check Out The Kickstarter