Start humming that iconic music and practicing your best Arnie impersonations as Riverhorse are about to unleash a Dark Fate upon the gaming world!

Players will scramble for resources and weapons so they can fend off the Terminator long enough to find some way to destroy it. Each time the Rev-9 finds you marks an important decision: you must choose whether you will flee or whether you will fight. Fighting is dangerous, as it allows the Rev-9 to inflict crippling wounds on your deck, but if you flee without doing enough damage, you know that the Rev-9 is waiting just around the corner.

Will you join the fight against the machines? The game is available in game stores
and here!

How to play Terminator: Dark Fate, the Card Game 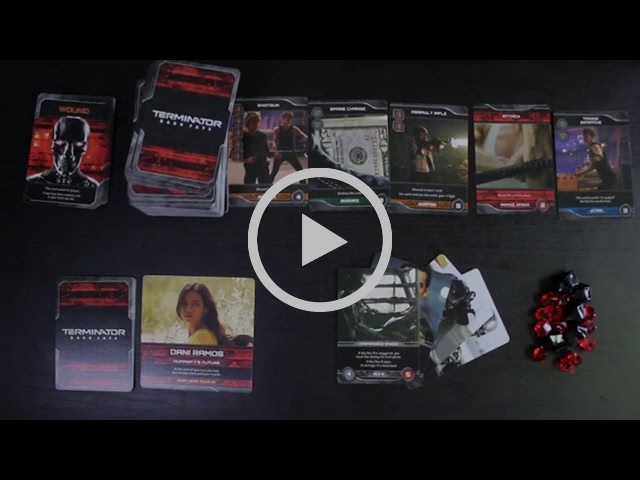 We are having a massive half-price clearance sale on all of our remaining Terminator Genisys miniatures. Now is the perfect time to complete your collection!

Included in the sale is the Terminator Genisys rulebook,, perfect for recreating the future war with Skynet with rules by award-winning designer Alessio Cavatore.

I'm a 55 year guy from Wigan in Lancashire living in Edinburgh, Scotland with two of my four awesome kids and my long suffering wife Laura. I have worked freelance over the years for some of the biggest names in tabletop and roleplaying and I am a very keen cosplayer and photographer.
View all posts by Marc Farrimond →
This entry was posted in British Gaming, news and tagged card games, Cult Movies, II'll Be Back, Riverhorse, Terminator: Dark Fate Card Game. Bookmark the permalink.