Brand new year and brand new releases for the every excellent Fallout: Wasteland Warfare from our pals at Modiphius Entertainment.  Ideal as objective markers or just to add a bit of flavour to your tabletop!

Both are available as part of our Fallout: Wasteland Warfare Collection and add twin treasure troves to bring both new flavour and vital supplies for your adventures in the Wasteland. 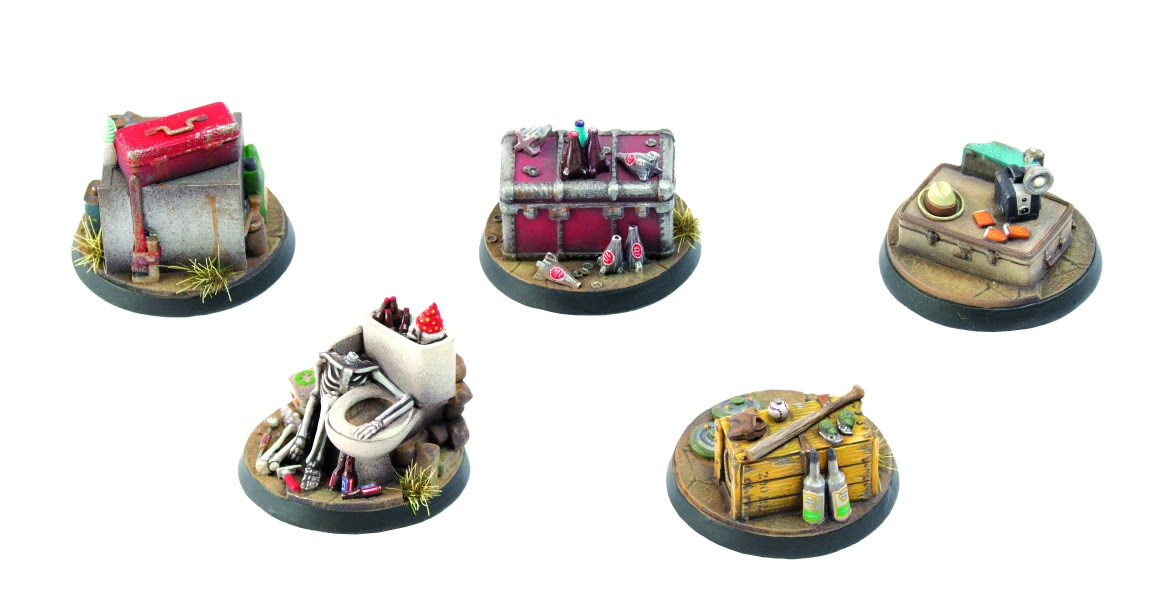 The wasteland is full of colourful creatures and people, all vying for control, supremacy, and survival. In the post-apocalyptic ruins, one man’s trash is another Deathclaw’s treasure. However, there are some trinkets, weapons, chems and even junk which are universally useful.

Terrain Expansion: Objective Markers 1
Tools, solvents and oils are always in high demand. Anything from maintaining a poisonous bite to tuning up a settlement’s defences all need lubricants, wrenches and gules, and a cache of these can be key to long term survival.

Nuka cola is refreshing and revivifying in any situation. Finding a crate of this pre-war treat means refreshment for mid and body (depending on the flavour and type. Finding ‘party boy’ in the ruins might seem like a cautionary tale, but for the perceptive this porcelain resting place is a jackpot. Health kits and stim packs are hidden close by – as are chem injectors and inhalers.

More ‘wholesome’ pursuits are to be had with the Big League crate. Nostalgia is nice, but survival is nicer, and a sturdy bat, baseball grenades, and ‘bases’ made of mines are of more use. For the inquisitive there may also be some liquid courage to be found.

Some of the most powerful boosts and prizes in the wasteland are the least obvious. Improving what makes you S.P.E.C.I.A.L can be the difference between life and death, and holotapes, comics and images can go a long way towards that. Either that or you can use any junk found in this stash to fire at people or upgrade your weapons! 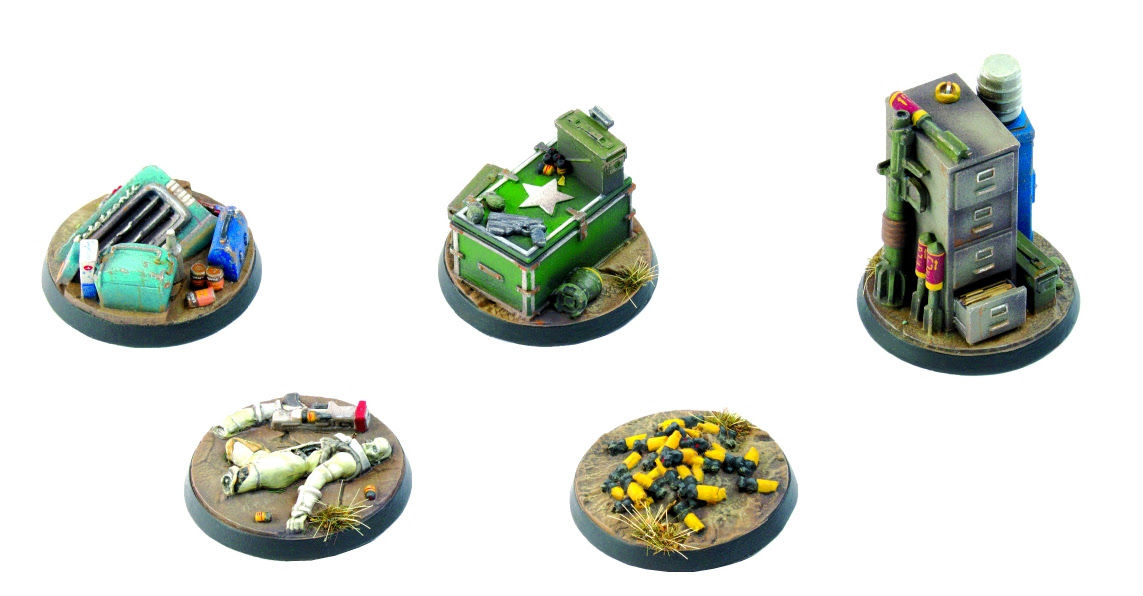 Terrain Expansion: Objective Markers 2
Synths are either one the greatest threats in the Wasteland or the path to saving humanity. What is not in doubt is that the body of a fallen synth is always a prize. Break it down for parts, examine it for weaknesses or fix it up to re-join the fray, you can only make the choice when you’ve claimed the downed android.

A stash of fusion cells for laser weaponry is the find of a lifetime, and can set a survivor or raider
for life – if they can hold it long enough to stake their claim. Grab a weapons crate and get fighting, with grenades and hard-round pistol fire. Sure, you wouldn’t say no to a laser rifle now and then, but nothing stops a territory fight or rampaging creature invasion like a mini nuke.

While a thorough search of ruins may only turn up plastic trays or years of old tax returns, there’s the odd diamond in the rough. Filing cabinets with ash trays? Rough. Finding working missile launchers with missiles? Diamond.

Last but in no way least comes one of the basics: food. Food containers, crates, cans and bottle all provide sustenance for the hungry – but watch out. Even the best preserved food can have fallen foul of radiation. Eating too much can give you even more mouths to feed (along with extra arms, limbs and glowing bits).