Its been a rumor for many years that Privateer Press where going to expand on their range of games by adding a science fiction version of the hugely popular Warmachine and now finally those rumors have been paid true!

From the Press Announcement

Privateer Press has announced that it will soon launch a Kickstarter campaign for their new Hobby Miniatures Hobby Game, Warcaster: Neo-Mechanika. Warcaster is a fast-paced skirmish-level wargame, with a brand-new science-fiction setting, set 5,000 years in the future of the Iron Kingdoms setting previously popularized by their games WARMACHINE and HORDES. The new game casts players in the role of Warcasters, psychic heroes charged with leading the armies of their chosen factions. Using the power of Arcanesssence, players power up their squads of infantry, channel spells through wizard-like Weavers, and supercharge their multi-ton machines of war, the warjacks. 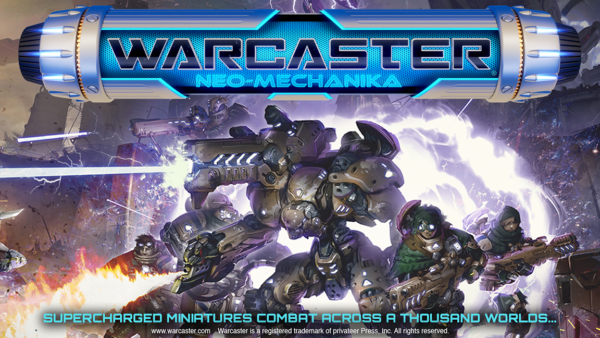 “Warcaster is a project we’ve wanted to bring to life for many years,” said Matthew D. Wilson, Chief Creative Officer and owner of Privateer Press. “It is the culmination of everything we have learned after 20 years of IP development, game design, miniatures production and publishing.”

“Warcaster: Neo-Mechanika embraces the idea of customization,” added Jason Soles, lead designer of Warcaster. “For the first time, players can customize which spells their Warcasters can use in battle and which weapons and abilities their warjacks possess.”

“We have developed an extensive, compelling universe that will allow plenty of room for the many future releases we have in the works,” said Wilson. “We hope our current audience as well as new players will look forward to making a leap with us to the stars.”

Warcaster: Neo-Mechanika launches within the next few weeks on Kickstarter and is expected to deliver its first wave of rewards in June of 2020. In addition to stretch goals and rewards for individual backers, the Warcaster Kickstarter will also include a pledge tier for retailers who would like to carry the game in their stores. Visit www.warcaster.com for a preview of the game, the universe, and the upcoming Kickstarter launch.