The pre orders for the upcoming Skyrim based miniatures game The Elder Scrolls Call to Arms from our good friends at Modiphius Entertainment are now finally live.  Check out some of these amazing looking miniatures and a sneak peak at how the game plays on the videos!

Today we’re really proud to announce that our next miniatures game, the The Elder Scrolls Call to Arms is now available for pre-order including bundles, minis sets, scenery. You can see the entire range at our Elder Scrolls Call to Arms Collection, which are available to pre-order now for delivery mid-April and read more about the game on our Discover page,
We’re producing the range in both multipart HIPS / hard plastic and resin and for the pre-order you have the choice of two great bundles which get you the Ethereal Dragonborn miniature alongside the core rule box and one each of the resin or hard plastic starter sets. 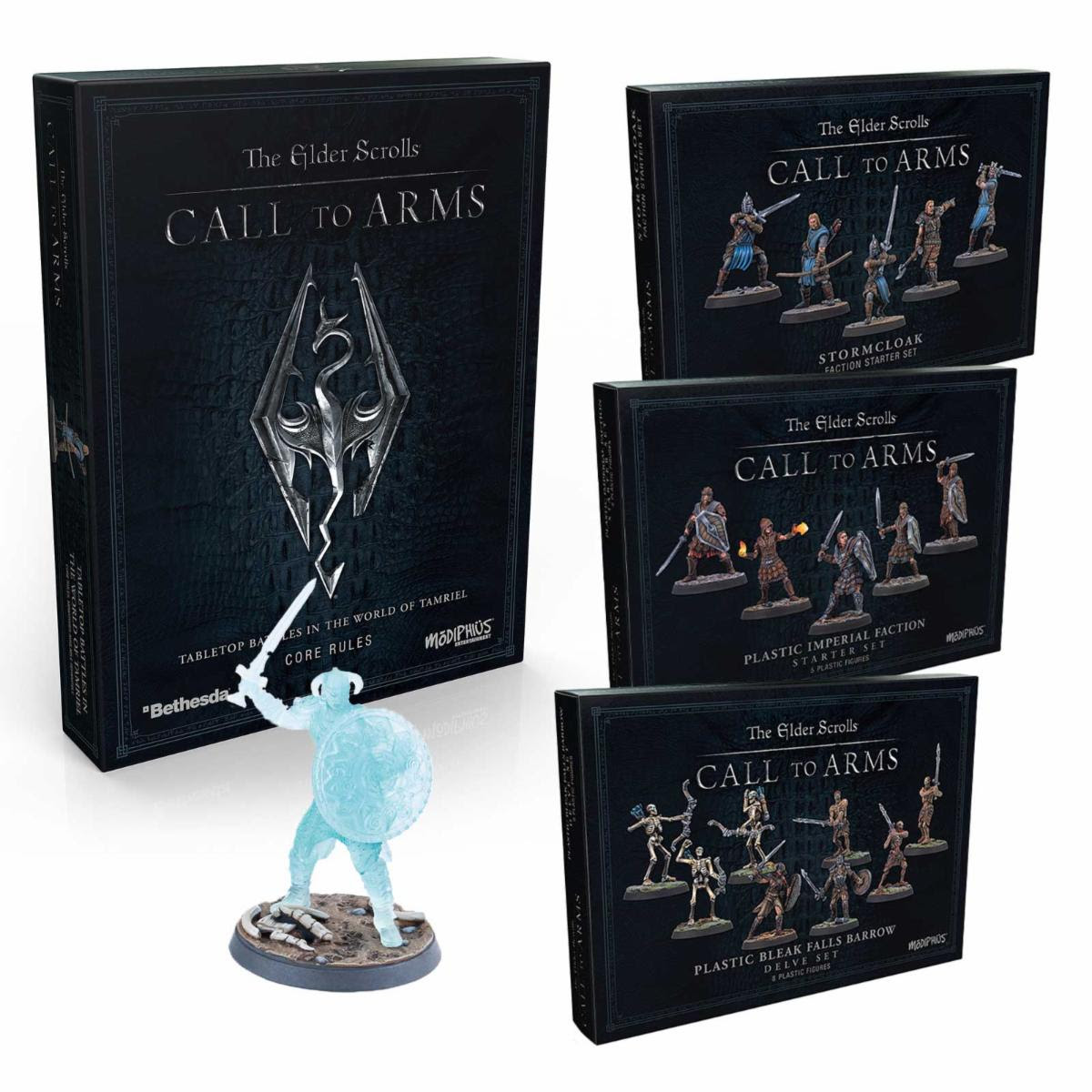 It’s very easy to get in to the game, all you need is just the core rulebox which is only £35 / $45 and then you can decide which faction to start, and get a box at a time.

The Elder Scrolls Call To Arms Core Rules Box Set
It is the time of the Dragonborn. Battle rages across the forests, plains and mountains of Skyrim as Imperials and Stormcloaks fight for supremacy. In ancient barrows, the restless dead rise from their sleep. Skeletons and fearsome Draugr jealously guard their treasures from bands of delving adventures.

Elder Scrolls: A Call to Arms is an adventure wargame set in the world of Tamriel. Gather your heroes and venture into Draugr haunted tombs and ruins, searching for treasure and glory. Or, fight the Civil War as the Stormcloaks and Imperials battle for the future of Skyrim.

This Core Rules set contains all the rules you need for exciting solo and co-operative delves, or 2 player battles with AI adversaries hindering both players. Begin your adventures in Tamriel with this essential boxed set. Containing the full rules of Elder Scrolls Call to Arms plus the dice and tokens required.

Perhaps you put your faith in the Stormcloak rebellion? 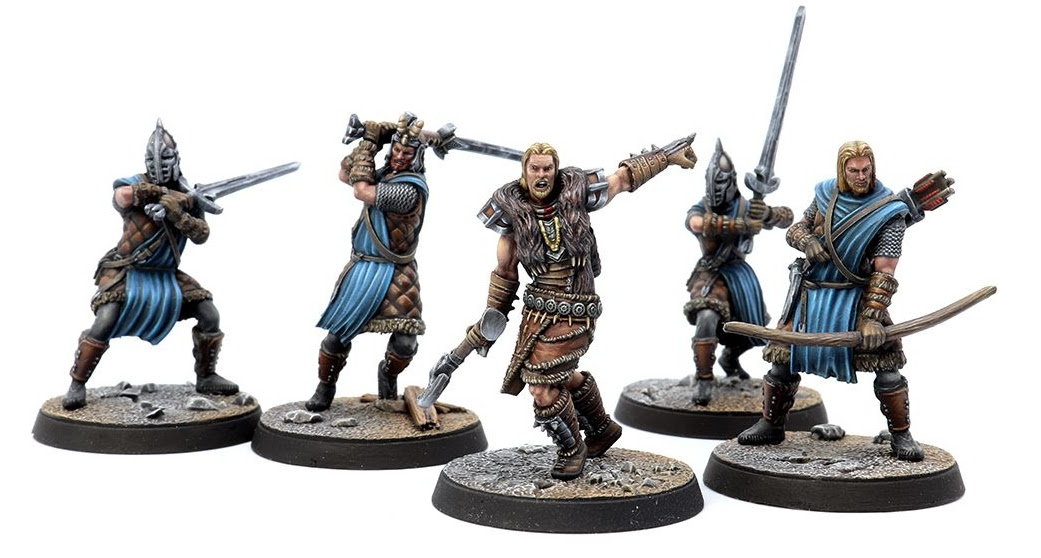 The Elder Scrolls Call To Arms Stormcloak Faction Starter Set
Take back your homeland with the Heroes of the Stormcloak Rebellion. The true sons of Skyrim are led by the terrifying YRSARALD THRICE PIERCED and RALOF, who stalks the field with bow and axe. Both are supported by three hard hitting STORMCLOAK SOLDIERS WITH GREATSWORDS. Available in Hard Plastic and Resin.
1 x Yrsarald Thrice Pierced, Stormcloak Commander
1 x Ralof, Warrior of the Resistance
3 x Stormcloak Soldier with Greatswords
Or your loyalty is to the Imperial Legion?

The Elder Scrolls Call To Arms Imperial Legion Faction Starter
Protect Tamriel and the Third Empire from your enemies with the staunch heroes of the Imperial Legion. HADVAR provides leadership and tactical expertise to the Legion Troops and is supported by the IMPERIAL MAGE, whose expertise with magic and weapons makes her deadly at range and up close. Finally, three IMPERIAL SWORDSMEN provide a stalwart backbone for your force. Available in Hard Plastic and Resin.
1 x Hadvar, Hero of Helgen
1 x Imperial Mage, Spellsword
3 x Imperial Soldiers with Sword and Shield
If you want to go delving solo against the AI, or need some fearsome adversaries for the co-op mode then Bleak Falls Barrow has what you need… 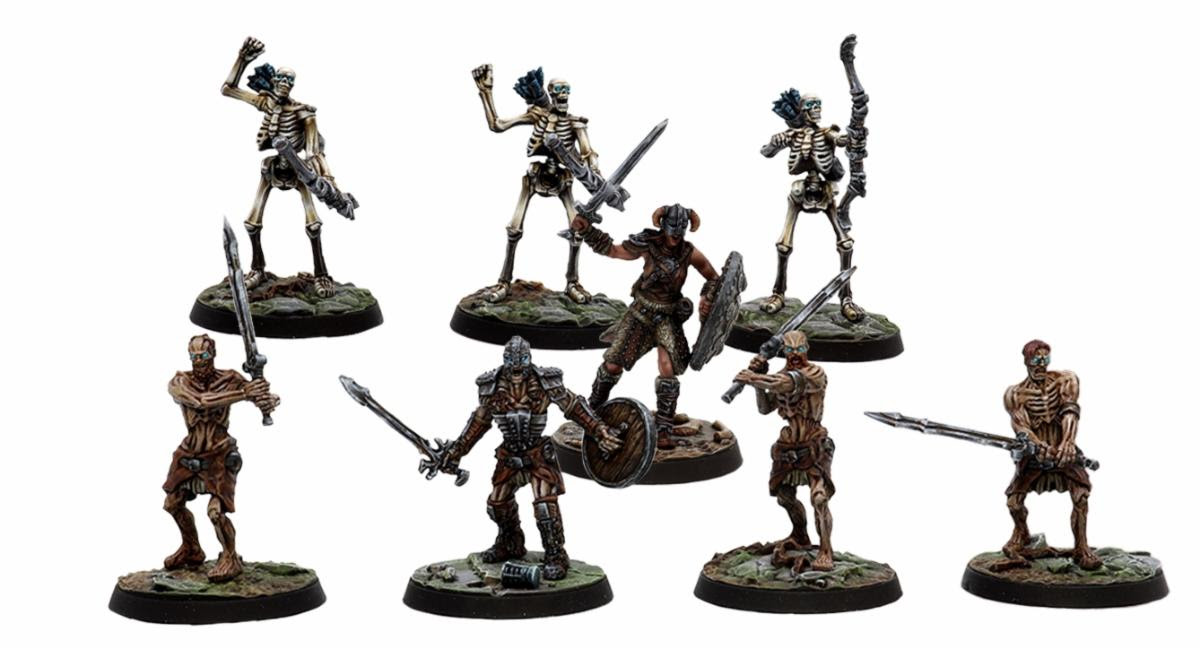 The Elder Scrolls Bleak Falls Barrow Delve Set
Explore the world of Elder Scrolls, as the Dhovakin faces the undead keepers of forgotten tombs and ruins. The DRAGONBORN delves into ancient Nord barrows and caves, equipped with her iconic weapons and armour. The Dragonborn is opposed by the deathless DRAUGR WARRIORS WITH GREATSWORDS and creaking SKELETON ARCHERS. These forces are led by one of the Dragonborn’s most fearsome enemies, the DRAUGR OVERLORD, who jealously guards the secrets of his resting place. Available in Hard Plastic and Resin.

Complete your adventure with our resin Terrain sets only available from Modiphius (though we hope to offer to retail soon). We have started our Skyrim adventures with a range of Nord inspired scenery – there’s the Puzzle Door, and Nord Tomb Walls for delve’s, and the large Bleak Falls Barrow Arches for outdoor battles. 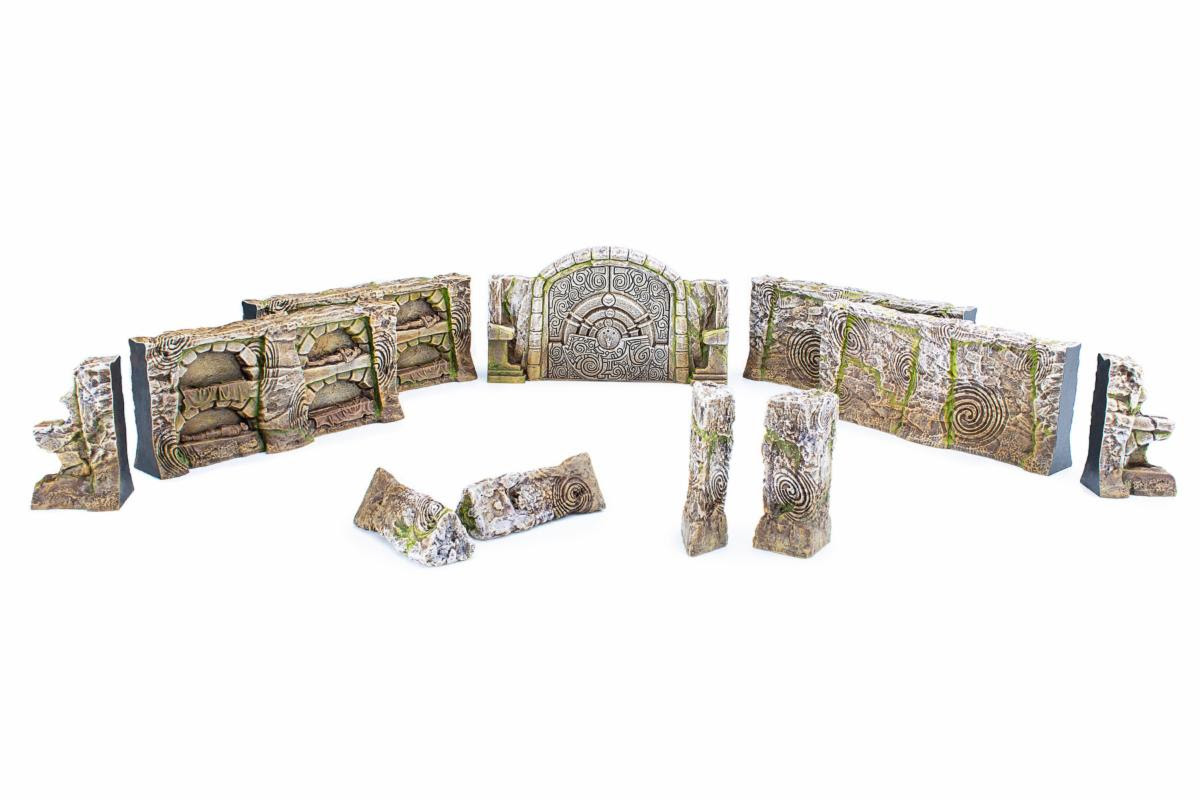 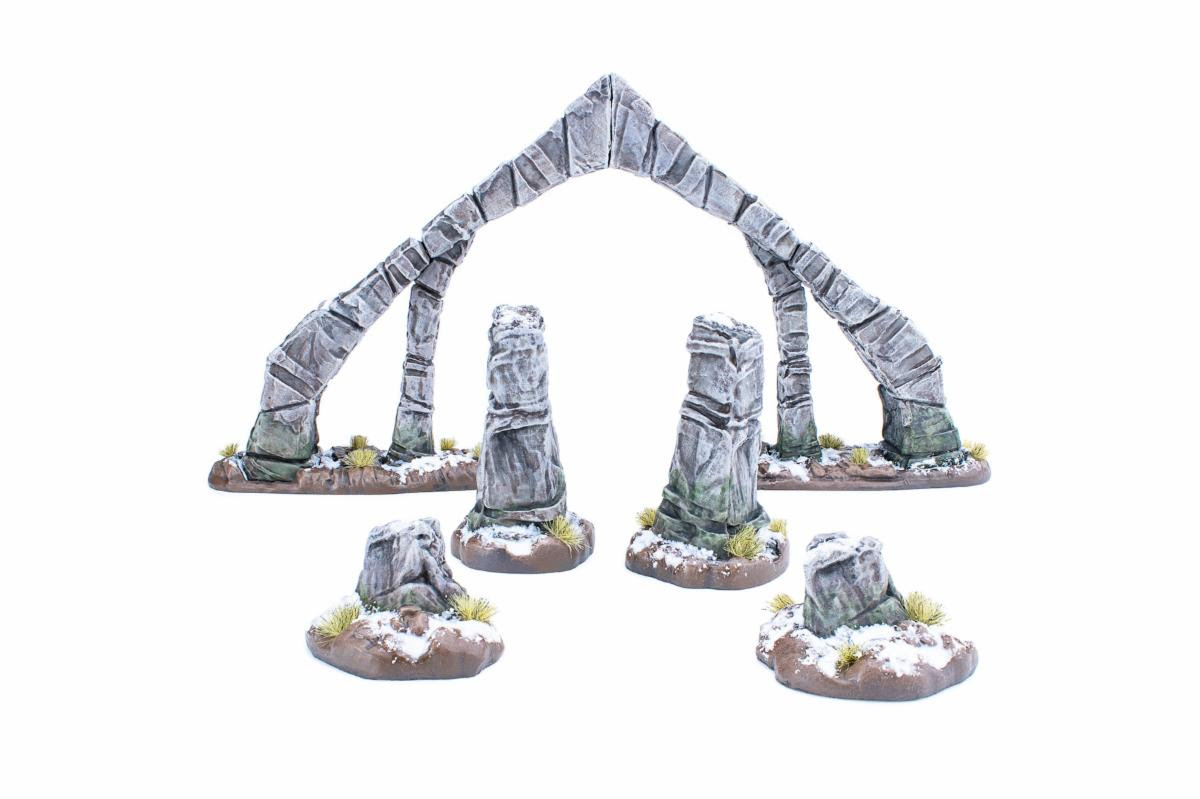 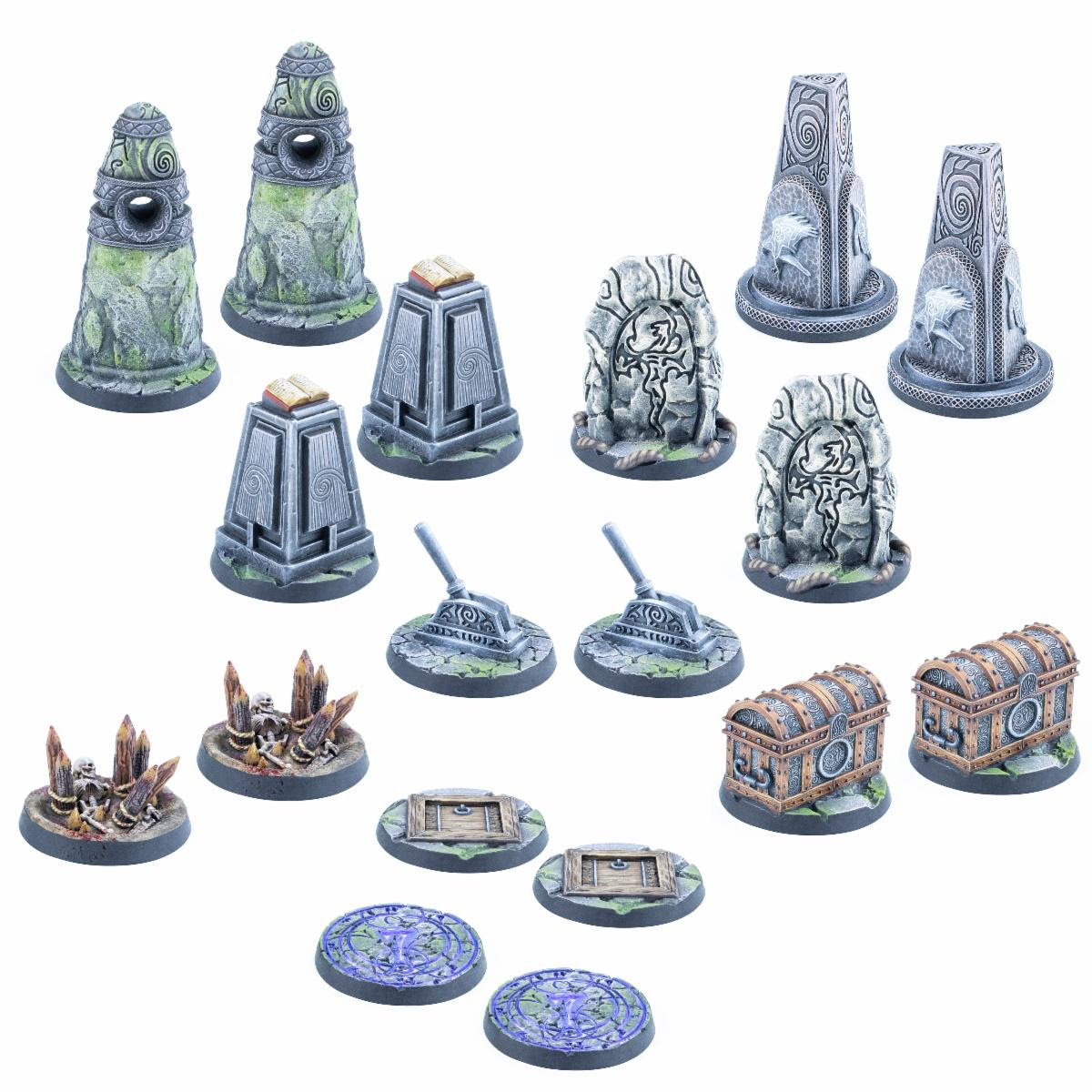 We’ve recreated the Objective Markers from the game as beautiful 3D resin miniatures – theres’ two of each in the Markers and Tokens set, and there’s also a set of Treasure Chests and Master Treasures for those looking to score big!
To jump straight in to it, pick up the Bleak Falls Barrow Scenic Bundle which includes 2 Nord Tomb Wall sets, 1 Puzzle Door, 1 Bleak Falls Barrow Arch Set, 1 Markers & Tokens set and 1 Treasure Chests Upgrade Set.
Finally complete your table with our Double-sided 3ft x 3ft neoprene battle matt featuring wilderness and Nord tomb flooring.
Check out how to play Call to Arms with our handy and short videos (with Battle Reports to come next) – you can find the playlist here.
We hope you enjoyed this first look at the range, there’s so much more coming through the spring with monthly releases to expand the factions and gameplay!