Just when you thought it was safe to go back into the wastelands, well it isn’t so stay at home and help save lives! To aid you in this quest our good friends at Modiphius Entertainment have some great news for fans of Fallout Wasteland Warfare.  #staysafe #stayinsavelives

Today we’re delighted to announce the release of the pre-order for the Mirelurks, awesome new adversaries to bring menace and terror to your Fallout: Wasteland Warfare tabletop and RPG adventures, plus twe brand new 3D STL terrain sets, the Preserved Red Rocket and the Ruined Red Rocket to print at home!
The Mirelurk Queen, Mirelurks, Mirelurk Hunters, Mirelurk Hatchlings + Eggs and the fearsome Fog Crawler are all available now to pre-order on Modiphius.net as part of the Fallout: Wasteland Collection and are expected to ship in late July. Their printed cards will be in the Enclave Wave 4 Card deck coming in September but we’ll be sending them out in PDF in June for pre-order customers so you can test them out. There’s even a special Mirelurk Bundle which gathers all five releases together at a very special price.
For those with 3D printers we have the Ruined Red Rocket and Preserved Red Rocket terrain set STLs which also happen to be compatible with our Vault STL sets too! 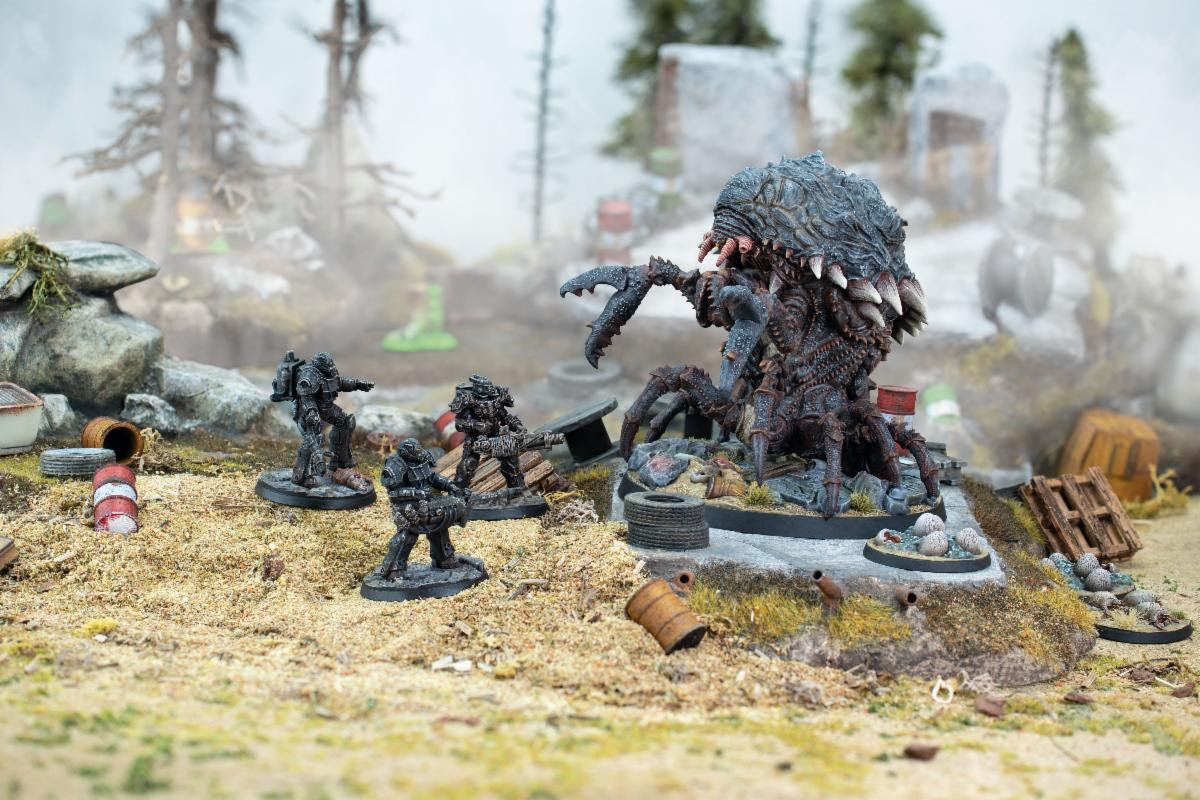 Mirelurk Queen
Most colonies in nature have a central queen figure, something that creates new members and must be protected at all costs. The mutated mirelurks are no different – except their queen needs little protection from the colony. Mirelurk queens are towering monstrosities. They drag themselves from their nests when the colony is under serious threat, huge dripping hulks made of pincers, claws and teeth. They dwarf even Super Mutant Behemoths, and are easily their equal in ferocity and speed. Experience has shown that taking down a mirelurk queen requires a small army or very highly skilled individuals. This is not just because of their size and physical power, but also because of the multiple tricks they have in store for the unwary. Oozing spouts allow them to spit and spray plums of caustic acid over a large area, eating into armor and liquifying exposed flesh! She’s on a massive 110mm base and almost 120mm high and comes with three protective hatchlings! 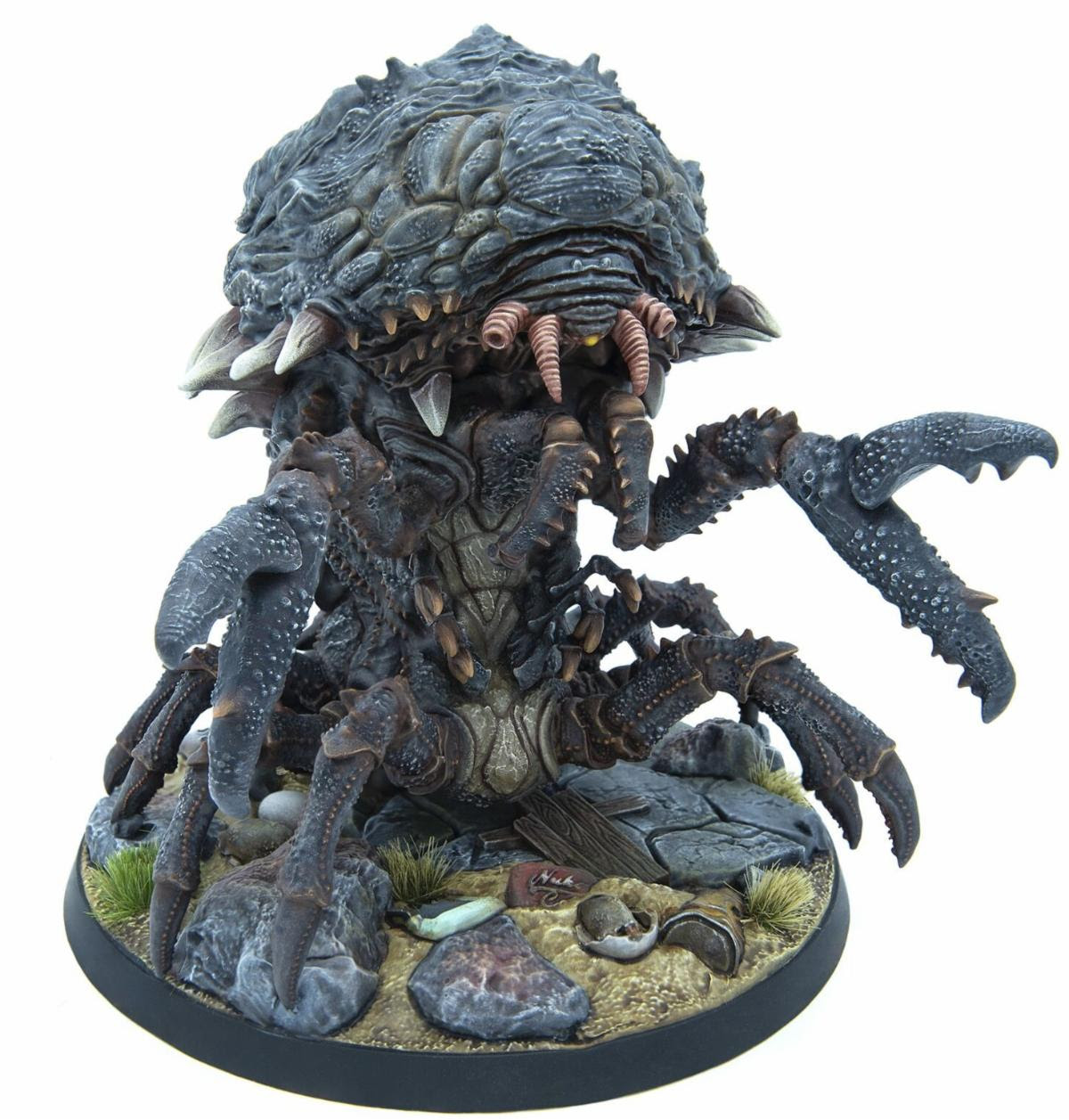 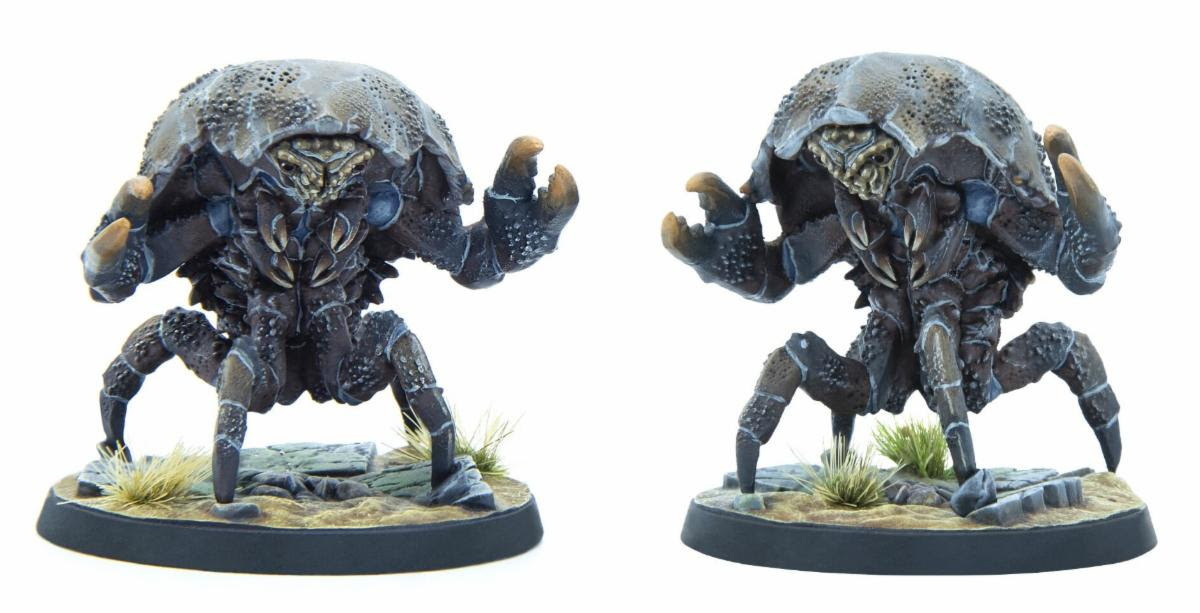 Mirelurks
Mirelurks make up the bulk of any hive, foraging for meat and protecting hatchlings and the queen. They spend much of their time buried in the muck and mire, both motionless sentinels and patient hunters; a toughened carapace jutting from the sand the only warning of danger. For many the emerging claws and chittering barbles are the last thing they will ever see – a moment’s frenzied violence, before the shoreline returns to its seemingly tranquil quiet. These are on 40mm bases – check the scale diagram below. 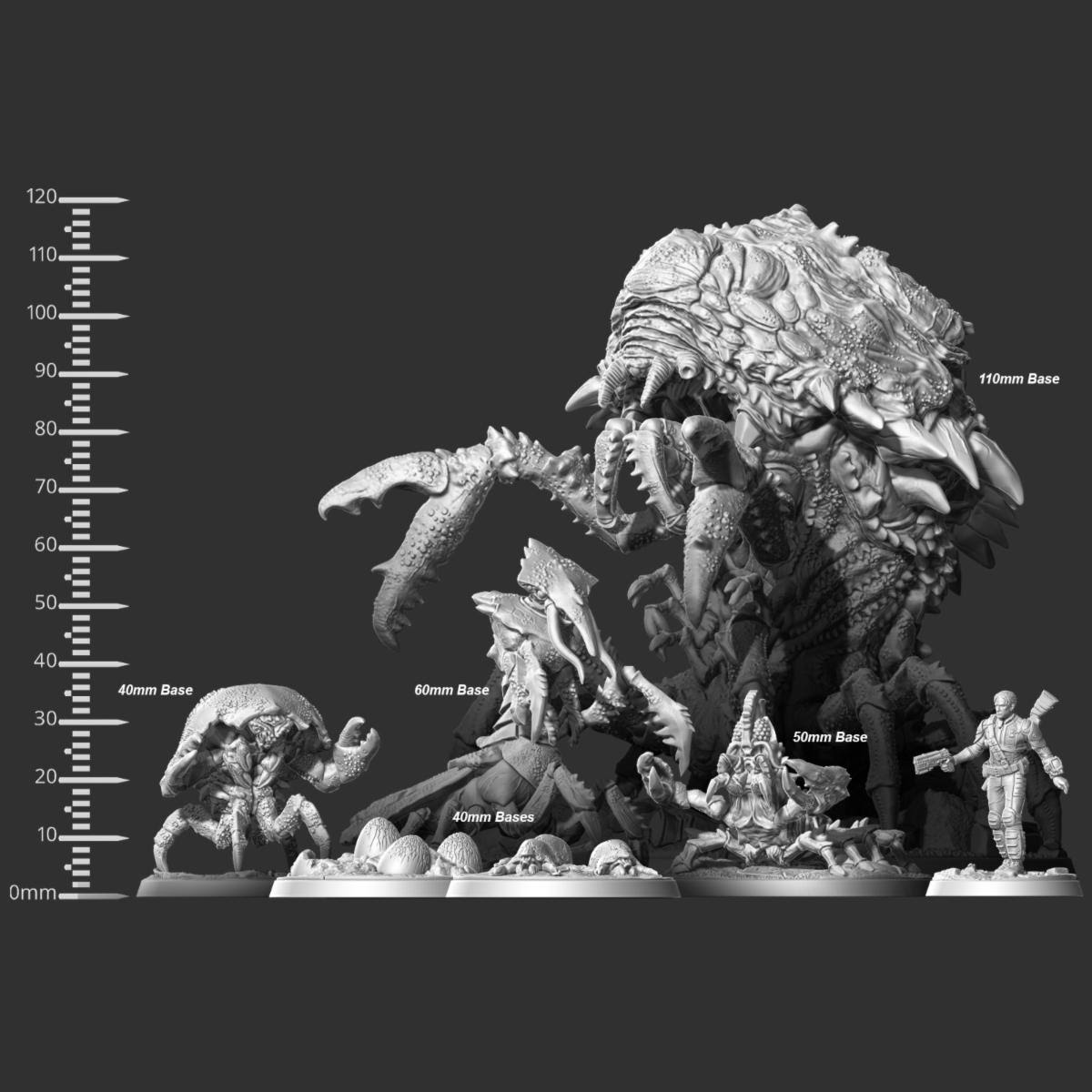 Mirelurk Hunter
Hunters are an aggressive subset of the mirelurk species. While fewer in numbers they are more active away from nests, foraging and hunting for enemies. They are able to spit acid in a similar way to their queen, and have powerful claws capable of crushing the life out of any enemy, dragging it back to be an unwilling fleshy ‘guest’ of a mirelurk feast. Mirelurk Hunters are more agile and tougher than the standard colony members, with armored heads and enhanced musculature. This makes them elite mirelurk fighters, strong opponents, and nightmarish foes for any force. This one is on a 50mm base!

Mirelurk Hatchlings + Eggs
Mirelurk Hatchlings are the first stage of mirelurk growth after emerging from eggs. Nests typically contain large numbers of egg clusters to ensure that at least some of their number will reach adulthood. However, the attrition rate is high. Some eggs are not viable, some hatchlings are too weak to survive. There is also no love lost for the hatchlings from the colony. The vast numbers of these creatures mean they are individually unimportant in many ways – they are even used as living projectiles by the queen when she is threatened; so long as some of them mature and the whole colony survives, they are dangerous but expendable swarms. Watch out – get too close and they might hatch! These are on 40mm bases.
Fog Crawler
Fog crawlers are aptly named. They inhabit coastal regions and islands, predominantly with low cloud and fog banks that they use to hunt. Their crawling, shambling gait when not enraged lets them move through the surf or into woods with ease, but swiftly accelerate to pounce on prey and enemies. Woe betide the unwary hunter who thinks they are safe because of the Fog Crawler’s apparent grazing; their explosive bouts of speed will put them in danger before they have time to realise the threat.
These monsters tend to be solitary beasts, stalking isolated but verdant regions as apex predators. Even the mighty Deathclaw keeps its distance. The Fog Crawler’s speed and dexterity mean it is more than a match for anything in its path, leaping and slashing at what will soon become its next meal. This monstrous addition to your table comes on a 60mm base and 60mm high! 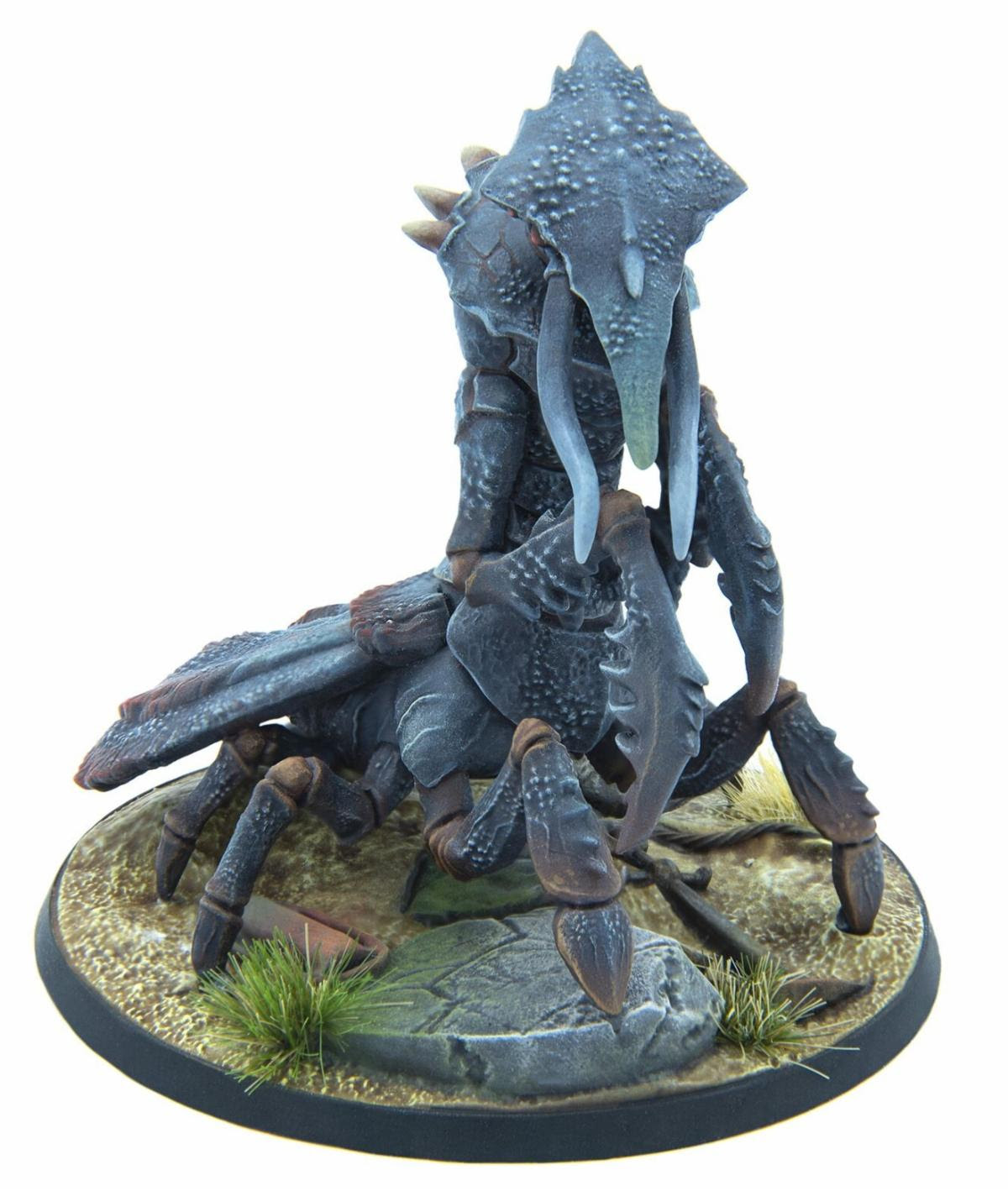 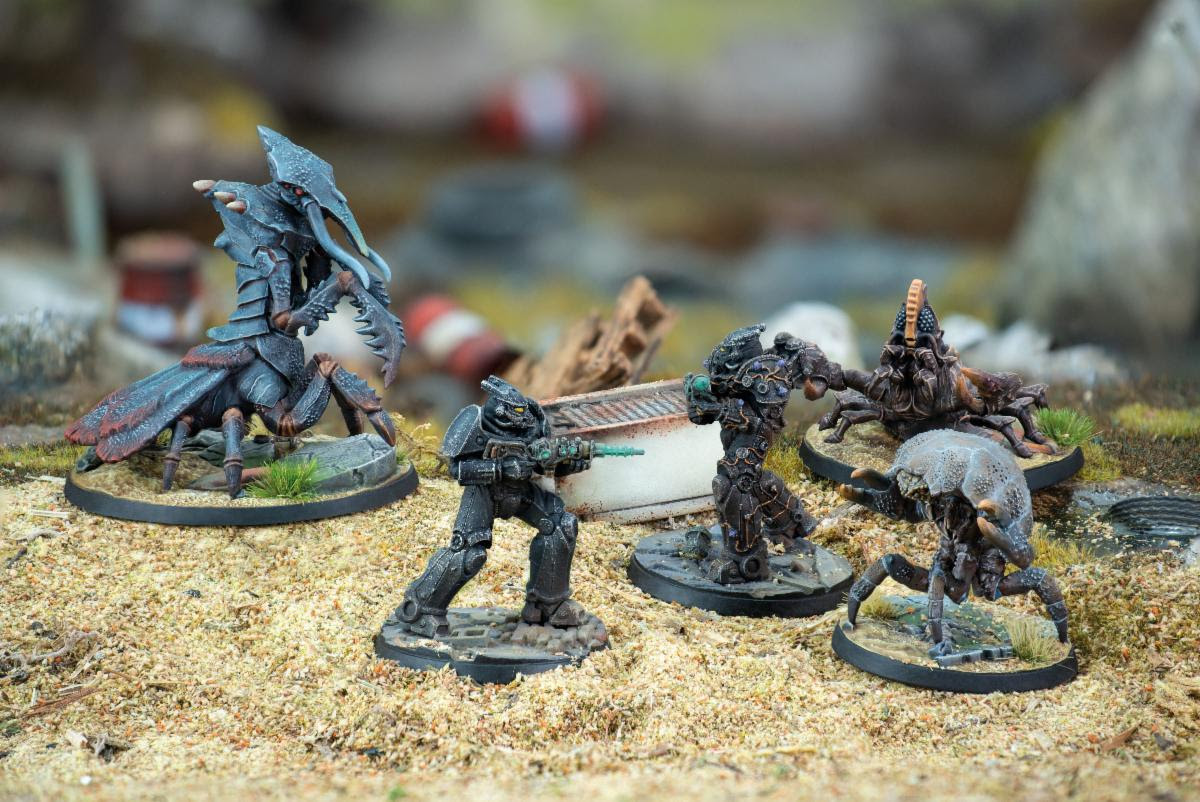 Ruined Red Rocket – STL
Red Rocket stops were an iconic feature of pre-war life in the United States,  evolving from simple gas filling stations to offer a wide range of services including fusion and coolant refilling services, following the widespread adoption of these technologies in 2066.
Sadly, this surviving example has fallen on hard times, it’s walls ailing, its roof caved in, worn down and fallen into disrepair by the passage of time and the depravations of life in the wasteland. Who knows what lurks inside its shabby exterior, valuable resources like food, chemicals or stims, or perhaps an ambush from denizens that do not wish to be disturbed? Its story is yours to tell, in this intriguing new 3D printed terrain feature. Is there a secret entrance to a Vault hidden inside? 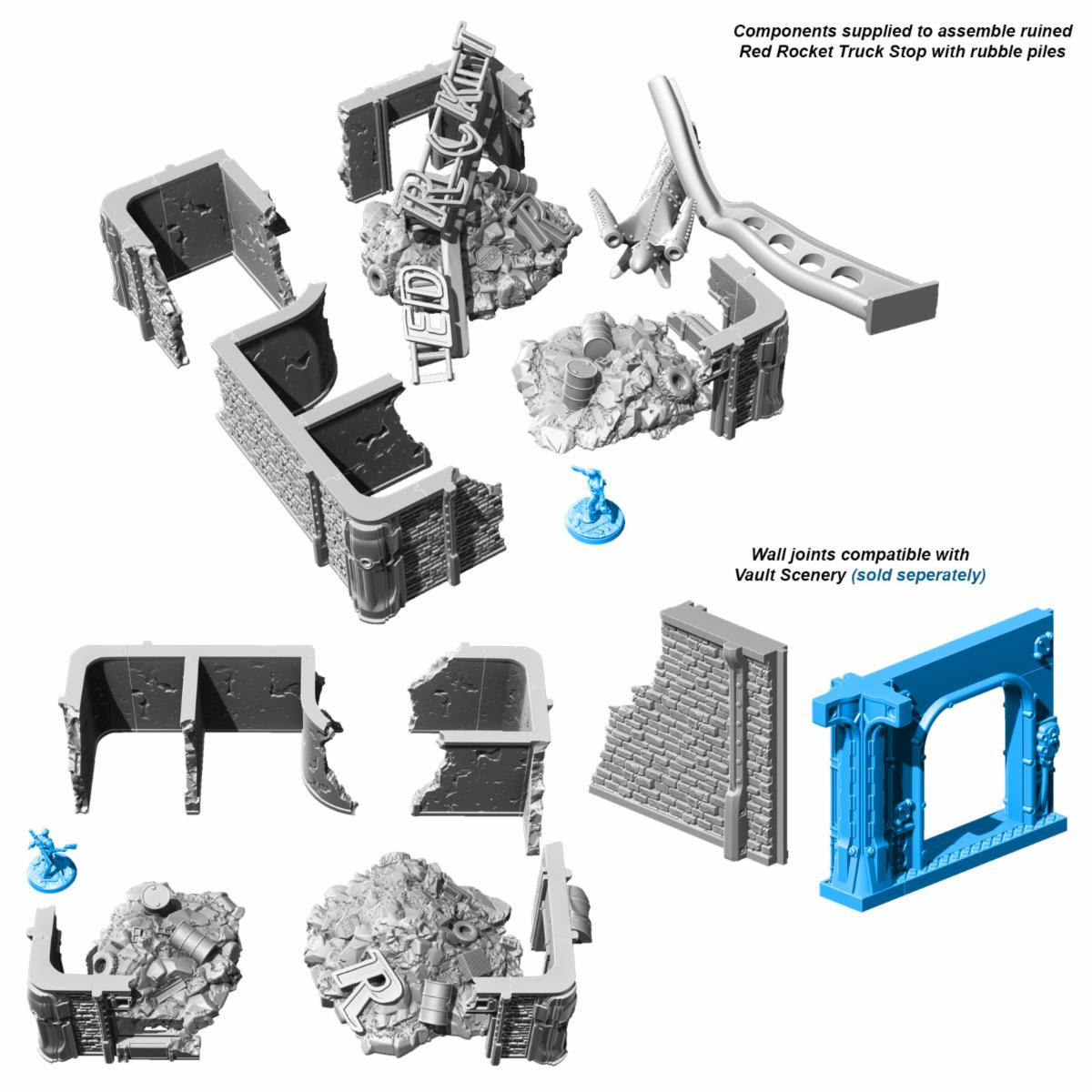 Preserved Red Rocket
Red Rocket stops were an iconic feature of pre-war life in the United States,  evolving from simple gas filling stations to offer a wide range of services including fusion and coolant refilling services, following the widespread adoption of these technologies in 2066.
Strangely, this surviving Red Rocket example seems to have been preserved in its entirety, its roof and walls still standing as if untouched by the ravages of time and life in the wasteland. Who knows what lurks inside its gleaming exterior, valuable resources like food, chemicals or stims, or perhaps an ambush from denizens that do not wish to be disturbed? Its story is yours to tell, in this intriguing new 3D printed terrain feature. 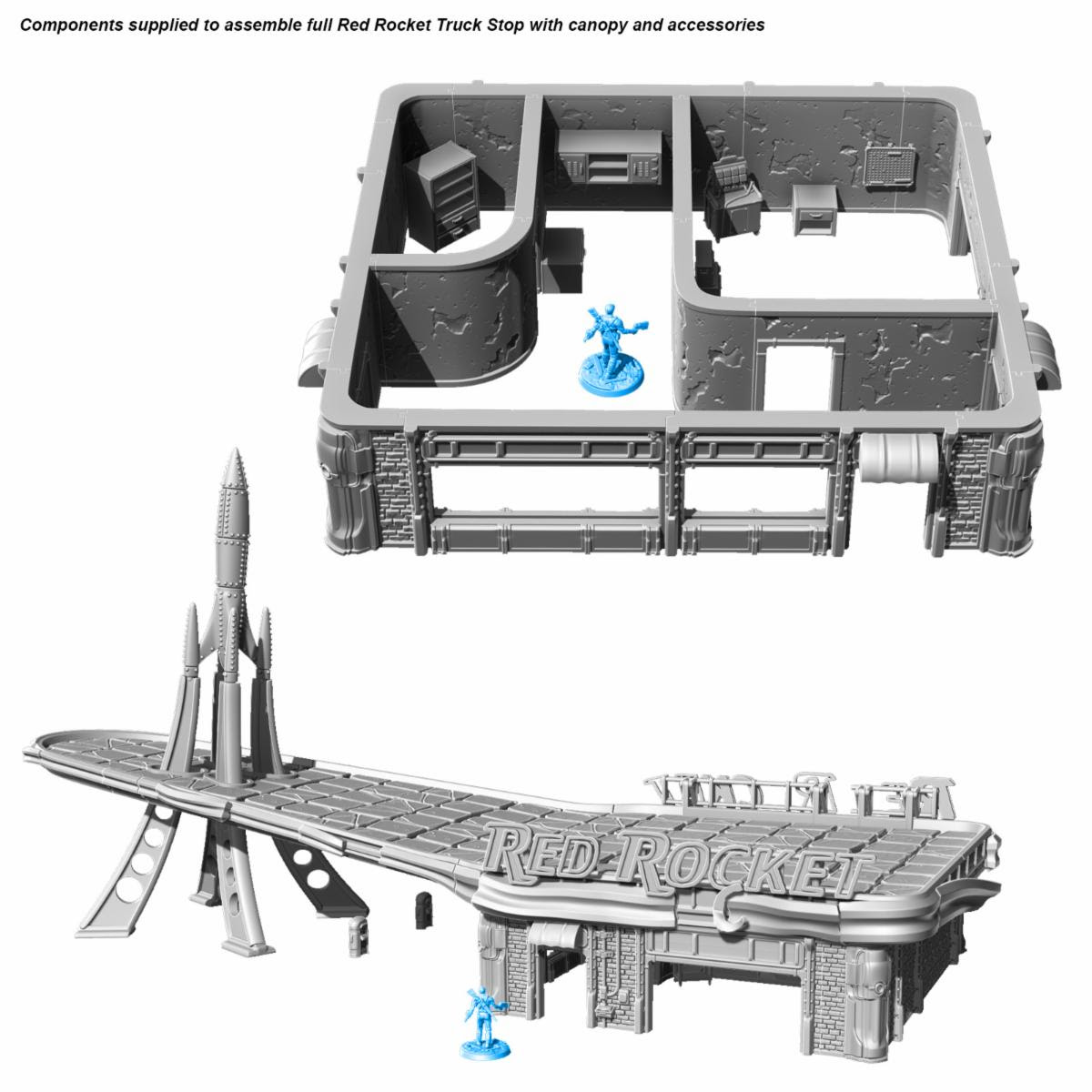